BY Heather Hughes on January 7, 2019 | Comments: one comment
Related : Soap Opera, Spoiler, Television, The Young and the Restless 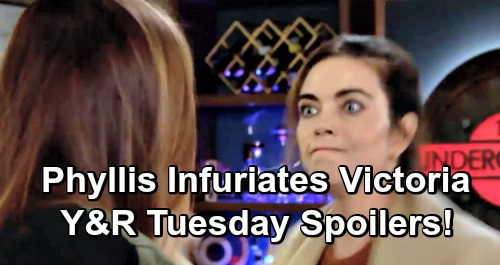 The Young and the Restless (Y&R) spoilers for Tuesday, January 8, tease that Phyllis Summers (Gina Tognoni) will try to fuel suspicions. Victor Newman (Eric Braeden) has been charged with the murder of J.T. Hellstrom (Thad Luckinbill), so it’s left the girls’ night gang on edge. Nikki Newman (Melody Thomas Scott) will be one step away from a confession from here on out, so they’ll have to watch her closely.

As for Phyllis, she’ll think the right man’s sitting behind bars. Victor isn’t responsible for this crime, but he’s committed many more. Phyllis will think justice is finally being served one way or another, so she won’t be on the same page as the others. Their alliance will be on shaky ground this Tuesday and things are only going to get worse later this week.

Victoria Newman (Amelia Heinle) doesn’t want Nikki to come clean, but she isn’t keen on watching her father go down for this either. After Phyllis badmouths Victor and hints at his guilt to Nick Newman (Joshua Morrow), Victoria will decide she’s had enough. She’ll smack her rival across the face, but Phyllis won’t change her mind about Victor deserving to suffer behind bars.

Like Victoria and Nikki, Sharon Newman (Sharon Case) doesn’t think Victor should be imprisoned for a crime he didn’t commit. Phyllis’ efforts to make Victor seem guilty also won’t work on Nick. He’ll remain determined to solve the puzzle and figure out who’s framing his dad. Since Phyllis is the only one rooting for Victor to stay locked up for life, look for a major Newman battle soon.

Other Young and the Restless spoilers say Devon Hamilton (Bryton James) will drop his guard. Will this be about business or personal matters? Devon’s been hesitant to trust Ana Hamilton (Loren Lott) after that stunt she pulled with Fenmore “Fen” Baldwin (Zach Tinker). He didn’t like that she went behind his back to record tracks, even though it worked out well.

Nevertheless, Devon could give Ana a little more control after all. That could certainly lead to some drama if Ana crosses the line again. Of course, Y&R fans know Devon is still struggling with grief over losing Hilary Hamilton (Mishael Morgan). He might lower his guard when it comes to sharing his deepest, darkest feelings.