BY Heather Hughes on July 8, 2019 | Comments: one comment
Related : Soap Opera, Spoiler, Television, The Young and the Restless 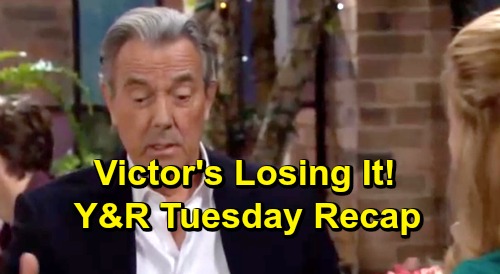 The Young and the Restless (Y&R) spoilers update and recap for Tuesday, July 9, tease that Paul Williams (Doug Davidson) will offer Christine Williams (Lauralee Bell) a rose in the park. Sadly, that can’t fix her looming problem. After the mayor calls with confirmation, Christine will admit the Newmans are being paid off. The mayor wants this lawsuit to go away, so Christine will have to make a formal announcement.

Next, Christine will suggest “it’s time,” but Paul will object to her decision. It’ll become evident by the end of the episode that Christine means giving up her position as DA. At Society, Jack Abbott (Peter Bergman) will observe as Victor Newman (Eric Braeden) gripes about his server not bringing the bill. Nikki Newman (Melody Thomas Scott) will point out that Victor already took care of it.

That’ll lead Jack to wonder if Victor’s mental health is slipping. He’ll mention the incident to Billy Abbott (Jason Thompson) and bring up Victor stepping down as CEO. However, Billy will advise Jack to let it go. Back with Victor, he’ll get a phone call and express excitement over some excellent news.

The Young and the Restless spoilers say Victor and Nikki will head to the park soon after. They’ll spot Christine and Paul, so Victor will rub in his victory just a bit. He’ll mention the big announcement Christine has coming up, but Paul will try to keep the peace. Victor will feel like Christine deserves jail time, but she’ll assure him that she’ll be the real winner before the day’s through.

At Nick Newman’s (Joshua Morrow) place, Summer Newman (Hunter King) won’t be pleased by what she finds. Nick will be sweetly covering Chelsea Newman (Melissa Claire Egan) with a blanket, so Summer will wonder what’s up. Y&R spoilers say Nick will explain the dead husband situation, but Summer will feel like her dad’s getting drawn to the past.

Since Chelsea needs to see Connor Newman (Gunner and Ryder Gadbois), Nick will want to speak with Victoria Newman (Amelia Heinle) about securing the Newman jet. He’ll push Summer to stay at the house while he’s out. Soon after, Chelsea will wake up to an angry Summer. Nick’s daughter will go into protective mode and rant about Chelsea being a human wrecking ball.

Despite Chelsea’s protests, Summer will worry that Nick’s going to get pulled into his ex’s drama again. She’ll make it clear that she’s got her eye on Chelsea. Afterward, Summer will speak to Jack and Billy about potentially being an influencer for the Jabot Collective. Once Jack learns Theo Vanderway (Tyler Johnson) was behind this idea, he’ll be a tad wary. Nevertheless, Jack will ultimately cave in.

After Summer heads out, Jack will suggest that Theo was problematic back in New York. He’ll fear Theo hasn’t moved beyond that phase, but Billy will imply that Summer’s dad can watch out for her. At Newman Enterprises, Victoria will initially shut down Nick’s request to use the Newman jet. She won’t want to get involved in Chelsea’s issues since her view of Adam Newman (Mark Grossman) could shift.

Nick will believe Chelsea has seen the light when it comes to Adam, but Victoria will think hate could turn back into love. They’ll bicker, but Victoria will agree to let Chelsea and Nick use the jet for Connor’s sake. Afterward, Nick will talk to Victoria about Dark Horse’s new high-rise development and how they can make some waves.

The Young and the Restless spoilers say Billy will show up next. He’ll speak with Victoria privately so they can discuss what Jack saw and the suspicions that are emerging. Victoria will point out that Victor’s new protocol comes with side effects, and one of them is confusion. They’ll be discussing the matter when Victor enters with Nikki, so Billy will make up another excuse for his visit.

Once Victor brings up his latest victory, they’ll watch Christine’s announcement. She’ll explain that they’ve settled the lawsuit with Victor before dropping a personal bomb. Christine will reveal that she won’t be seeking reelection as DA, so it sounds like a new path is brewing.

At the coffeehouse, Jack will chat with Mallory about their parents. He’ll also touch on Traci Abbott’s (Beth Maitland) love interest with baggage. After watching Christine’s announcement with Paul by his side, Jack will tell him to give Chris his best. When a phone call comes in for Paul, it’ll be regarding Calvin Boudreau’s (John Burke) autopsy.

At Nick’s place again, he’ll tell Chelsea the Newman jet’s ready and waiting. Nick will insist on coming along so Chelsea can just concentrate on Connor. The Young and the Restless spoilers say Chelsea will keep leaning on Nick in the coming episodes, which obviously won’t go over well with Adam!

How far will Adam go to get his family back? We’ll give you updates as other Y&R details and rumors emerge. Stick with the CBS soap and don’t forget to check CDL often for the latest Young and the Restless spoilers, updates and news.