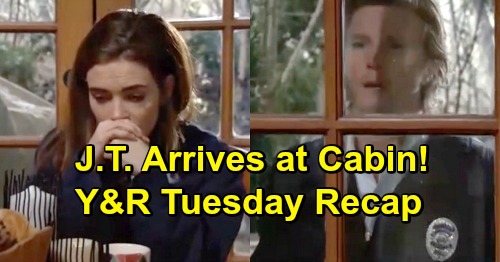 Nevertheless, Nick will feel like they’ve got everything covered. Two guards will be posted for protection outside and Sharon will get reassurance from Rey by phone. He’ll let her know he intends to fix the mistake he made, and the risk will be worth it in the end.

Victoria will worry about Billy and Nick becoming J.T. Hellstrom’s (Thad Luckinbill) next targets. They’re dealing with a very ruthless man here. Talk will turn to Rey, who now controls their fates. Y&R spoilers say Sharon will defend Rey as a good guy, so Nikki and Victoria will just hope she’s right.

At the coffeehouse, Tessa Porter (Cait Fairbanks) will support Mariah Copeland (Camryn Grimes), who’ll be feeling helpless. They’ll discuss putting a rally together for the cover-up crew and using GC Buzz as the platform. Tessa will toss around some protest song lyrics and suggest maybe she can help. She’ll want to right some wrongs and spend all the time she can with Mariah before her own trial.

At the Abbott mansion, Kerry Johnson (Alice Hunter) will be startled when Jack Abbott (Peter Bergman) emerges from a sheet fort. He’ll explain that he’s pitching in with Billy’s kids, who dashed off to the kitchen with Mrs. Martinez. Jack will want to make sure Johnny Abbott (Holden and Ryan Hare) and Katie Abbott (Sienna Mercuri) have lots of love and support right now.

After Kerry speaks with Phyllis Summers (Gina Tognoni) by phone, she’ll promise Jack she isn’t bailing on their plan. Jack will be surprised by how easy it is for Kerry to betray Phyllis. However, he’ll ultimately let it go and opt to take the children to the park with Kerry.

Back with Nick and Billy, they’ll locate a listening device that J.T. left behind. After divulging their discovery to Rey, he’ll suggest they know what do to. The Young and the Restless spoilers say Billy and Nick will relay a fake plan. They’ll discuss how the women are at a Dark Horse warehouse and will soon be transported out of the country by plane.

Unfortunately, J.T. already knows where Nikki, Victoria and Sharon are. He’ll show up outside the cabin on Tuesday’s new Y&R episode, March 19, in police officer uniform and gaze inside at the ladies. At the hospital, Abby Newman (Melissa Ordway) will want the truth from Kyle Abbott (Michael Mealor). She’ll think it’s obvious that Summer Newman (Hunter King) is Lola Rosales’ (Sasha Calle) donor and blackmailed Kyle into marriage.

Kyle will deny it, even when pressed by Arturo Rosales (Jason Canela). Lola’s brother will gripe about Kyle not being good enough for her, so Kyle will vow to leave as soon as he knows she’s OK. Fortunately, Dr. Nate Hastings (Brooks Darnell) will have great news about Lola’s transplant. Everything went just fine on her end. Sadly, Summer’s surgery didn’t go as well, so Kyle will look concerned.

Rey will also get a troubling call in Tuesday’s episode. He’ll be nervous when Paul Williams (Doug Davidson) tries to get in touch. At a motel, Devon Hamilton (Bryton James) will tail Ana Hamilton (Loren Lott) and knock on the door she went in. Elena Dawson (Brytni Sarpy) will answer, but she’ll try to act like Devon’s got the wrong room number.

Devon won’t take no for an answer, so Ana will reveal herself and blast him for following her. He’ll complain about where Ana’s money has been going, but everything will become clear after Jet Slade appears. Devon will recognize Jet as a famous R&B star of the past. It turns out Jet is Ana’s father and Elena is his nurse as well as his niece. Ana has been helping Jet by providing money for his treatments.