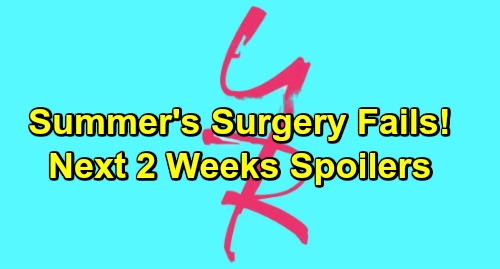 The Young and the Restless (Y&R) spoilers for the next two weeks tease that some Genoa City chaos is brewing. During the week of March 18-22, Mia Rosales (Noemi Gonzalez) will stir up some trouble. Y&R fans will see what really went down during that fateful snowstorm. Since it turns out Mia and Arturo Rosales (Jason Canela) had sex, she’ll use that to her advantage.

Mia will insist that Arturo’s going to help her fix her marriage to Rey Rosales (Jordi Vilasuso). She’ll plan to blab about their cheating to Abby Newman (Melissa Ordway) if he doesn’t. Later, Arturo will make a surprising admission. Will he refuse to let Mia have power over him? Could Arturo confess his hookup mistake to Abby and seek her forgiveness?

Whatever the case, Mia will remain stuck in a mess. Speaking of messes, Kyle Abbott (Michael Mealor) is facing one as well. He married Summer to secure a liver donation for Lola Rosales (Sasha Calle), but she wants to keep everything hush-hush. However, that won’t stop Abby from cornering Kyle and asking him if Summer’s indeed the donor. She already suspects it thanks to Arturo’s tip.

Kyle will do his best to hide the truth and honor the terms of his deal with Summer. Unfortunately, some bad news is coming up. Dr. Nate Hastings (Brooks Darnell) will note that unlike Lola’s operation, Summer’s surgery didn’t go very well. They’ll have a hard time waking Summer up once the procedure’s over.

While Kyle worries about his new bride, he’ll worry about his ex, too. Lola will be confused about why he’s been avoiding her, so Kyle will come clean. He’ll admit that he tied the knot with Summer – and it looks like he’ll reveal why, too.

Over with the escaped cover-up crew, they’ll brace for a faceoff as J.T. Hellstrom (Thad Luckinbill) approaches the cabin. Nick Newman (Joshua Morrow) and Billy Abbott’s (Jason Thompson) scheme will leave the ladies in grave danger. At a motel, Devon Hamilton (Bryton James) will tail Ana Hamilton (Loren Lott) and find a woman she’s been visiting. He’ll realize Ana’s extra money has been going to her.

The Young and the Restless spoilers say Elena Dawson (Brytni Sarpy) will explain everything with Ana’s help. There’s a good chance this secret will leave Devon sympathetic instead of riled. We should note that Y&R will be preempted for basketball coverage on Thursday and Friday, March 21 & 22, but the action will pick right back up during the week of March 25-29.

Y&R fans can expect Ashley Abbott (Eileen Davidson) to head home briefly. She’ll be back in Genoa City for a two-episode visit, but it’ll pack a punch. Will Ashley’s partnership with Kerry be revealed? Next, Victoria Newman (Amelia Heinle) will face some struggles. She’ll hate the reality she’s living in, so J.T.’s takedown may not clear the cover-up crew immediately.

The murder convictions should be thrown out, but they all still obstructed justice. Their escape could be an issue, too. There may even be doubts over whether or not this is the real J.T. Christine Williams (Lauralee Bell) will probably try every trick in the book to keep the women locked up.

Fortunately, Victor Newman (Eric Braeden) will come through for Nikki Newman (Melody Thomas Scott), Victoria Newman and Sharon Newman (Sharon Case). He’ll save them in a surprising way, which could lead to Paul Williams’ (Doug Davidson) stunning choice. The Young and the Restless spoilers say Paul will make his return and most likely play a role in fixing all this with Christine.

It sounds like the next two weeks will bring some gripping moments. We’ll give you updates as other Y&R details emerge. Stay tuned to the CBS soap and don’t forget to check CDL often for the latest Young and the Restless spoilers, updates, and news.