The Young and the Restless Spoilers: Mia Pregnant with Arturo’s Baby – Y&R Rewrite Changes the Game for Ruthless Schemer? 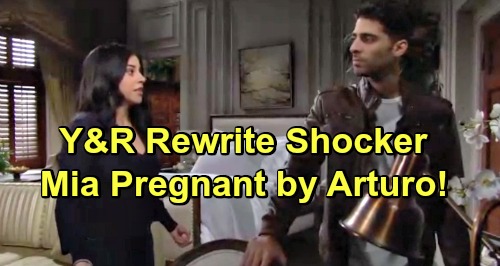 The Young and the Restless (Y&R) spoilers tease that a major story twist could change the game for Mia Rosales (Noemi Gonzalez). Since Josh Griffith has taken over for Mal Young as Y&R’s head writer, there’ll be some plot adjustments over the next few weeks. One of those adjustments comes in Monday’s new Y&R episode, March 18. A flashback shows a hot secret that’ll affect several characters moving forward.

Remember the night of the snowstorm when Arturo Rosales (Jason Canela) fixed Mia’s furnace and faced temptation? It turns out he couldn’t fight it after all. The Young and the Restless spoilers reveal that Mia and Arturo slept together that night, so that’s huge news for many reasons. For starters, Mia can hold it over Arturo’s head.

On Monday, Mia insists that if Arturo doesn’t help her win back Rey Rosales (Jordi Vilasuso), she’ll tell Abby Newman (Melissa Ordway) that he cheated. That’ll give Arturo an incentive to fix Rey and Mia’s marriage, but he can’t stop the truth from coming out. Everyone knows that a soap hookup never stays a secret forever! Arturo could lose Abby forever when this cheating bomb drops.

Of course, the biggest issue is that Mia is faking a pregnancy…or is she? Could Mia actually be pregnant with Arturo’s baby? Y&R viewers will recall how Mia seemingly paid a pregnant woman for urine in the hospital waiting room. That appeared to be how she pulled off the positive pregnancy test.

However, that also indicates Mia never actually took a test herself. Perhaps when she faked the pregnancy test, she didn’t know she could’ve had a positive result on her own. The Young and the Restless likely rewrote it this way to raise the stakes and move the story along. It could even set up some quick exits if they want it to.

There’s a chance Mia doesn’t actually have a bun in the oven and will simply get tripped up by her secret. At some point, Mia’s pregnancy claims will surely make Arturo wonder if the baby is his. That could lead to pressure and the explosive truth about the phony pregnancy. There’s also a possibility Mia will switch strategies out of desperation and argue that the fake kid belongs to Arturo.

Nevertheless, having Mia truly be pregnant by Arturo would be the soapiest route. The Young and the Restless spoilers say it’d bring the most drama for fans, so let’s hope the show delivers! We’ll give you updates as other Y&R details emerge. Stay tuned to the CBS soap and don’t forget to check CDL often for the latest Young and the Restless spoilers, updates, and news.

Arturo & Mia: in a series of flashbacks we see that Mia and Arturo slept together in January (the night of the storm). That would make her 2 months pregnant. #YR #Shey pic.twitter.com/wM22izdYIq