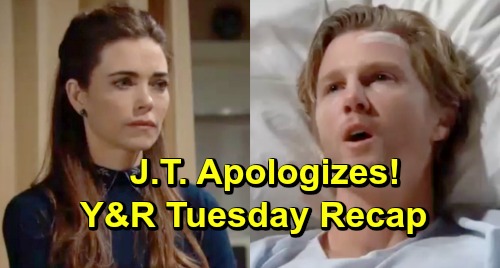 The Young and the Restless (Y&R) spoilers update and recap for Tuesday, March 26, tease that Paul Williams (Doug Davidson) will be back for an important task. He’ll insist that Rey Rosales (Jordi Vilasuso) crossed the line and must be punished for it. Paul will tell Rey to turn in his badge and his gun, so Rey will be out of a job. However, it’ll all be worth it since Sharon Newman (Sharon Case) will be a free woman.

At the cottage, Sharon will get a visit from Mariah Copeland (Camryn Grimes). After a brief reunion, Mariah will head to work while Nick Newman (Joshua Morrow) sticks around to enjoy pizza with his ex. Sharon will be grateful for how he stepped up to save her, but Nick will point out that it wasn’t just him. He’ll make it clear that Rey took a huge risk for love.

Over with Nikki Newman (Melody Thomas Scott), she’ll be back by Victor Newman’s (Eric Braeden) side. They’ll share some lovey-dovey moments as Victor hands over a necklace for Nikki. They’ll share some kisses while Victoria Newman (Amelia Heinle) gets summoned to the hospital. Dr. Nate Hastings (Brooks Darnell) will have some huge news regarding J.T. Hellstrom’s (Thad Luckinbill) health.

The Young and the Restless spoilers say Victoria will learn J.T. had a brain tumor, but it was removed through emergency surgery. Nate will admit it may have been the reason for J.T.’s out-of-control behavior. J.T. will call out for Victoria, so she’ll listen to his apology. He’ll pour his heart out and assure Victoria that none of this is her fault. J.T. will promise that Nikki did the right thing that night.

Victoria will point out that J.T. is still wanted for his attempts on Victor’s life, which J.T. will understand. He’ll note that it wasn’t the real him, but his hands did the crimes. Victoria will assure J.T. that she doesn’t hate him. They’ll always be connected through Reed Hellstrom (Tristan Lake Leabu), but she also can’t forget what happened.

Y&R spoilers say Victoria will indeed continue to struggle with emotional trauma, so some nightmares seem likely. In the meantime, Billy Abbott (Jason Thompson) will reach out to Victoria, but she won’t want to see him. After Victoria greets her kids, she’ll push Billy to leave. Back with J.T., Christine Williams (Lauralee Bell) will inform him that he’ll face charges soon.

At Dark Horse, Arturo Rosales (Jason Canela) will come clean to Abby Newman (Melissa Ordway). He’ll admit the slept with Mia Rosales (Noemi Gonzalez) and explain how it happened, but Abby obviously won’t be understanding. Instead, she’ll take a hammer to Arturo’s truck and smash as much of it as she can.

Arturo will catch Abby in the act and tell her to do whatever she has to do. He’ll assure her of his love, but Abby won’t want to hear it. At home, Rey will find Mia packing up her belongings. She’ll learn he got fired for helping Sharon, which will lead to a heated argument. Mia will rant about Sharon lying to Rey, but he’ll stand his ground. His marriage to Mia is over and that’s that.

Mia will drop the sex-with-Arturo bomb, but Rey won’t exactly be shocked by it. He’ll think it’s typical of Mia to never be satisfied. Rey will ask if the baby is even his, but Mia will suggest he shouldn’t pretend he cares. Afterward, Rey will track Rey down and deliver a hard punch. He’ll admit he knows what went on between Arturo and Mia.

Finally, Rey will stop by Sharon’s place. The Young and the Restless spoilers say Sharon will express her gratitude and Rey will promise she’s the one he wants. They’ll share a kiss, but is Mia really done stirring up trouble? Regardless, she’s certainly the loser in this love triangle.

Y&R fans won’t want to miss the great drama ahead. We’ll give you updates as other details emerge. Stay tuned to the CBS soap and don’t forget to check CDL often for the latest Young and the Restless spoilers, updates and news.