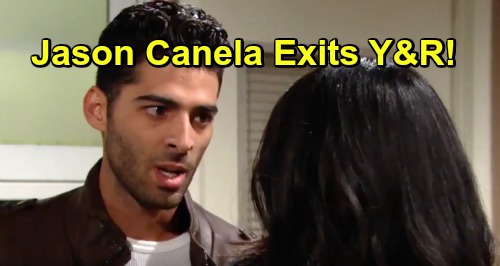 The Young and the Restless (Y&R) spoilers tease that a casting shake up is coming up when Arturo Rosales (Jason Canela) leaves Genoa City. Coming up during the week of March 25, Abby Newman (Melissa Ordway) will learn that her fiancée slept with Mia Rosales (Noemi Gonzalez) just a few weeks ago. And, as you can expect, she will not take the news well at all.

The Young and the Restless spoilers state that Mia and Arturo could leave Genao City together. When the truth comes out, Arturo will be left with nothing. Abby will not want anything to do with him and his brother will be furious. In the weekly promo video, Rey Rosales (Jordi Vilasuso) will get in a throwdown with his brother, presumably over the Mia hookup.

Knowing this, it is easy to see the set up for Arturo’s exit. The actor posted to Twitter, announcing his exit. He wanted to thank CBS, his co-stars, and most of all—the Y&R fans.

“When I signed my one-year contract with Y&R I was excited because for the first time in three years living in this city I was able to call a studio like Television City home,” the Young and the Restless actor shared. “Add to that the incredible people I’ve had the pleasure of working with who I’ve been lucky enough to create genuine relationships with like Peter Bergman (Jack Abbott), Melissa Ordway , Jordi Vilasuso, Sasha Calle (Lola Rosales), and Naomi Gonzales just to name a few (sorry guys, but Peter is my favorite) I feel blessed to have been a part of something so special like the Y&R family.”

Canela went on to say that he feels blessed to be part of something special, thanking the fans for accepting him and tuning in to see Arturo’s story. He paid special tribute to the crew behind the scenes, stating they put everything together and make the show what the fans know and appreciate.

Are you surprised that Jason Canela is leaving Y&R? Do you think Arturo and Mia will leave together? Don’t forget to come back to CDL later for more The Young and the Restless (Y&R) spoilers, news, and casting updates!

I feel blessed to have been a part of something so special! I appreciate each and every single person that makes up part of the @YandR_CBS family! Our makeup team, our crew, our security! Without them there is nothing 💯🙏🏽 The team behind the camera is what makes it all worth it pic.twitter.com/Yd5IpO923s