The Young and the Restless Spoilers: Wednesday, February 14 – Chelsea Comes to Lily’s Rescue – Billy Cooks Up a Huge Surprise 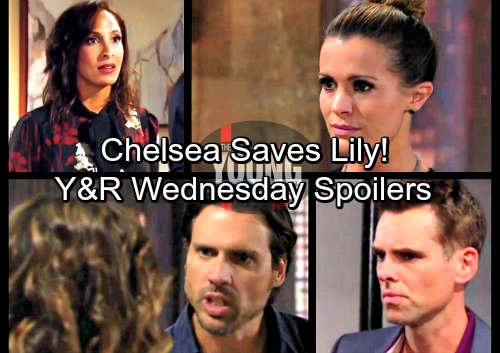 The Young and the Restless (Y&R) spoilers for Wednesday, February 14, tease that Valentine’s Day will bring some romantic moments. Several Y&R couples will be feeling the love on this special occasion. First, Cane (Daniel Goddard) and Lily (Christel Khalil) will be all about starting a new chapter. They’ve chosen to put the mistakes and conflict in the rearview mirror.

Lily and Cane are ready to renew their vows, so this will truly mark a clean slate for the duo. However, there’ll be a bit of a hiccup. Lily won’t be sure which wedding dress she should wear. She has Drucilla’s (Victoria Rowell) gown, which she wore in 2009, and another dress she donned for her 2012 ceremony.

The Young and the Restless spoilers say Chelsea will step up to solve the crisis. She’ll take some design elements from each gown to create a new one. Once Lily dons her dress, the family will gather to hear those heartfelt vows. Charlie (Noah Alexander Gerry), Mattie (Lexie Stevenson) and even little Sam will join in the fun.

Lily and Cane’s vow renewal isn’t the only big event happening on Wednesday. Billy (Jason Thompson) also has a surprise in store for Phyllis (Gina Tognoni). The Young and the Restless spoilers state that Hilary (Mishael Morgan) will tip Phyllis off. She’ll believe Billy’s about to propose, so Phyllis should face a flood of emotions.

Billy will indeed pull out a ring box later, so we’ll see if he’s about to pop the question. “Philly” fans are rooting for them! In the meantime, Victor (Eric Braeden) and Nikki (Melody Thomas Scott) will put their charade on full display. They’ll want everyone to believe they’re a happy couple.

Of course, their ruse should result in growing feelings. This reunion is still an arrangement, but Valentine’s Day should help them make progress. Nikki and Victor’s marriage may be the real deal before you know it.

As for Nick (Joshua Morrow) and Chelsea, they’ll struggle to work through their recent issues. They’ll manage to move past the hacking drama for now, but Nick has more bombshells headed his way. We’ll give updates as other Y&R news comes in. Stay tuned to the CBS soap and don’t forget to check CDL often for the latest Young and the Restless spoilers, updates and news.