BY Heather Hughes on October 6, 2017 | Comments: one comment
Related : Soap Opera, Spoiler, Television, The Young and the Restless 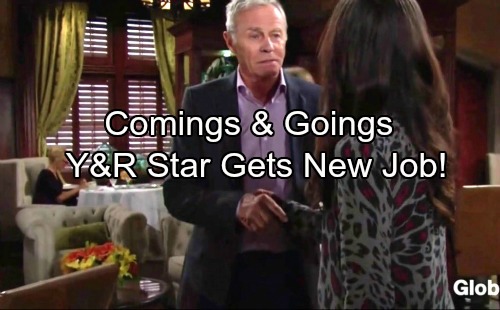 The Young and the Restless (Y&R) spoilers tease that a few familiar faces will pop up in Genoa City. We’ve got some comings and goings news to pass along. For starters, Tristan Rogers is returning to the CBS soap as Colin. Y&R viewers won’t want to miss Colin’s comeback, which kicks off October 9.

As if Cane (Daniel Goddard) didn’t have enough to deal with, Colin will complicate his life even further. Juliet (Laur Allen) won’t know how to react to Colin and his mischievous nature. Since she’s a bit mischievous herself, maybe they’ll be two peas in a pod.

Cane may be annoyed by Colin’s interference at first, but that won’t stop him from seeking advice. Colin obviously isn’t the best person to turn to, but at least he can offer some support. Lily’s (Christel Khalil) decision to end the marriage has left Cane in dark place. Let’s hope Colin can lift Cane’s spirits.

October 9 will also bring Traci (Beth Maitland) home to the Abbott clan. She’ll give Ashley (Eileen Davidson) a stunning clue about Graham (Max Shippee). Thanks to an old yearbook, Ashley will realize Graham’s real last name is Davis. That’s sure to catch Ashley off guard!

Other Young and the Restless spoilers say Geoffrey Going is set for a return as well. Going played the part of Troy back in 2012. It was only for one episode, but Y&R liked Going enough to bring him back as a bailiff a couple years later.

Going was around for a handful of episodes in 2014, so perhaps his upcoming stint will be about the same length. If Going reprises his bailiff role, that might mean some courtroom scenes are looming. Will Victor (Eric Braeden) be back on the hot seat or could someone else feel the heat instead?

Since Lauren (Tracey E. Bregman) doesn’t get a lot of airtime these days, fans of her portrayer might want to check out the new film she’s working on. Bregman has been cast in Still, a horror short about a desperate man’s actions. When the main character’s wife receives a cancer diagnosis, it drives him down a dangerous path.

Bregman plays a doctor in this scary flick, so it should be fun to see her as a different type of character. There’s no word yet on when and where this short film will be released, but Bregman has been posting location shoot pics on her Instagram account. She’ll undoubtedly keep everyone in the loop as the film moves forward.