BY Heather Hughes on July 3, 2018 | Comments: one comment
Related : Soap Opera, Spoiler, Television, The Young and the Restless 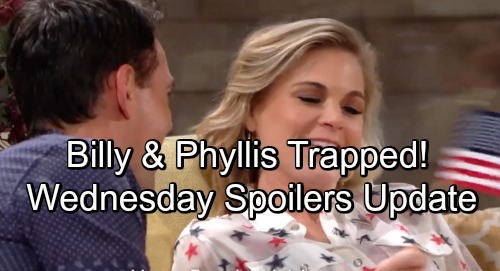 The Young and the Restless (Y&R) spoilers update for Wednesday, July 4, tease that the Independence Day festivities will get underway. Hilary (Mishael Morgan) will have a special show planned, but her big guest will fall through. The mayor won’t be able to make it after all, so Hilary will just have to improvise.

Lily (Christel Khalil), Cane (Daniel Goddard) and Abby (Melissa Ordway) will all be asked to participate. Charlie (Noah Alexander Gerry) and Mattie (Lexie Stevenson) will go on camera as well. When Hilary lashes out over Shauna’s (Camryn Hamm) blunders, Lily will urge her to cool it. As a result, Hilary will back off and let Shauna have fun for the rest of the day.

Afterward, Cane and Lily will call the twins out on their strange behavior. Mattie and Charlie will admit they’ve got another bash to attend. Lily and Cane will grant their request for permission, but the teens will change their minds later. They’ll end up returning for some Y&R family fun and fireworks.

Other Young and the Restless spoilers say Tessa (Cait Fairbanks) will seem preoccupied with texts. She’ll eventually snap out of it and sing a song to fill some time for Hilary. Tessa will make it clear that Hilary owes her! As for Hilary’s moment in the spotlight, she’ll tell her viewers how much this holiday means to her. Hilary will bring it all back to impending motherhood and the joy that’s given her.

Over with Phyllis (Gina Tognoni), she’ll celebrate Billy’s (Jason Thompson) birthday by handing over a bowl of whipped cream. Baking cakes isn’t really her thing. Before they head out on the yacht, they’ll need to retrieve the keys from Jabot. Thanks to some construction, they’ll face a situation they weren’t expecting!

Billy and Phyllis will get trapped in the elevator, so they’ll have to make the best of it. After some steamy sex sessions, they’ll get caught by Arturo (Jason Canela) and the rest of his crew. The elevator doors will finally fly open and reveal the naked lovers under only a blanket.

Afterward, Arturo will have some naked fun of his own. He’ll have a passionate encounter with Abby back at his place, so these two are definitely heating things up. Back with Cane, Esther (Kate Linder) will offer a warning about Jack (Peter Bergman). She’ll contend that Jack tends to get what he wants, so Cane will become even more determined to protect Chancellor.