The Young and the Restless Spoilers: Monday, January 28 – Victor Searches for Missing Summer – Sharon and Nick Spar Over Dark Secrets 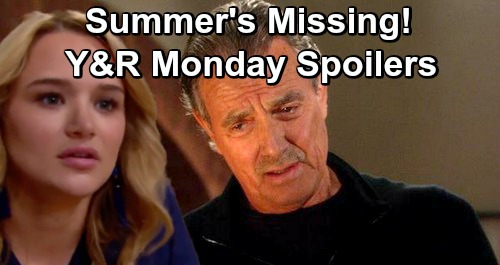 The Young and the Restless (Y&R) spoilers for Monday, January 28, tease that Nick Newman (Joshua Morrow) will fume over all the liars in his life. He was quite understanding when it came to his own flesh and blood, but he’s not as lenient when it comes to those in his bed. However, there are some complicated issues here. Nick will want to go over plenty of them when he confronts Sharon Newman (Sharon Case).

Nikki Newman (Melody Thomas Scott) was just protecting Victoria Newman (Amelia Heinle) from an attack, so Nick gets why they did what they did. Phyllis Summers (Gina Tognoni) doesn’t fare as well on Friday thanks to the murder weapon she kept. Since Phyllis also squeals on Sharon, the final cover-up crew member should get an earful in Monday’s episode.

Sharon may play dumb at first like she did with Mariah Copeland (Camryn Grimes). When it comes to Sharon’s web of lies, she doesn’t come clean until the jig is without a doubt up. Nevertheless, Nick will make it clear that he knows she’s involved. He’ll corner Sharon and insist that she has to tell him everything.

The Young and the Restless spoilers say Sharon will wonder what Nick’s going to do with this info. He’ll suggest that’ll he’ll have to hear it before they decide. Once Sharon spills the story, Nick may lash out at her for the secrets between them. She acted like he was a dog for keeping his hookup with Phyllis a secret, but she was lying to him as well.

Of course, that’s because Nick really was a dog for hooking up with Phyllis and hiding it! Sharon was wrong to keep Nick in the dark, but at least she had a good reason. She was helping to keep Nikki out of prison, so she should push Nick to recognize that. Sharon never asked to get wrapped up in all the Newman family’s drama.

Speaking of Newman family drama, Victor Newman (Eric Braeden) will get some shocking news. It looks like he’ll learn Summer Newman (Hunter King) has disappeared, so he’ll be on a desperate mission to find her. Since we know Summer will arrive back in town on Tuesday’s new Y&R episode, January 29, it makes sense that Y&R will likely use Monday’s episode to set it up. Missing Summer is undoubtedly on a flight back home!

Kyle Abbott (Michael Mealor) and Fenmore “Fen” Baldwin (Zach Tinker) will do some modeling for Kerry Johnson (Alice Hunter) at some point this week, so expect buttons to be pushed. Fen always finds a way to drive Kyle up the wall. Throw Summer in this mix and there’s going to be big trouble.