The Young and the Restless Spoilers: Mia and Arturo Leave GC Together – Y&R Cheating & Pregnancy Rewrite Leads To Exit? 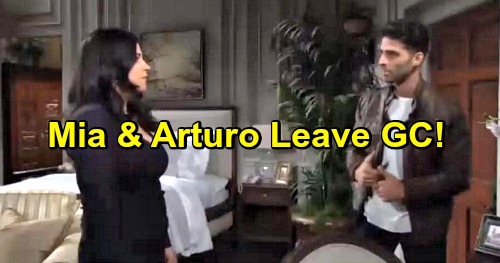 The Young and the Restless (Y&R) spoilers tease that the CBS soap may be taking some characters off canvas. Y&R recently added Elena Dawson (Brytni Sarpy) along with Ana Hamilton’s (Loren Lott) father, Jett Slade (Gilbert Glenn Brown). There’s also an Adam Newman recast in the works. It seems likely that we’ll see other additions as well, so some cuts will naturally have to be made.

We already know Kerry Johnson (Alice Hunter) is on her way out. Some Rosales family members may be on the chopping block, too. Many Y&R fans haven’t been thrilled with this fam lately. There are two Rosales characters in particular that could easily be dropped. Of course, we’re talking about Mia Rosales (Noemi Gonzalez) and Arturo Rosales (Jason Canela).

The Young and the Restless rewrote the story to include Arturo and Mia’s hookup, which is a huge warning sign. That obviously wasn’t the plan before, so why are they in a rush to completely trash the characters? It could be because they’re headed for the exit door. There’s no other logical reason for the rewritten twist and the hurried consequences.

Since Mia and Arturo clearly can’t stay away from each other, will they ultimately leave town together? Will they decide they can’t fight fate and shouldn’t try? Mia wouldn’t have been stringing Arturo along if she truly wanted Rey Rosales (Jordi Vilasuso). Likewise, Arturo couldn’t have been that in love with Abby if he’d sleep with Mia and betray his brother all over again.

Mia and Arturo may be in denial about their destiny. They’re both hypocritical cheaters, so they’re perfect for each other. It’s obvious there are some strong feelings between them. They might as well accept that and stop hurting everyone else by trying to keep things going on the side.

Perhaps that’s the exit strategy Y&R has in mind for Arturo and Mia. Maybe they’ll just leave town together and let everyone else live in peace. They could get their own twisted version of a happily ever after while Rey Rosales (Jordi Vilasuso) gets his chance to move on with Sharon Newman (Sharon Case).

Let’s say Mia is indeed pregnant with Arturo’s child. She might come clean to him about the attack on Lola Rosales (Sasha Calle), which was meant for Abby Newman (Melissa Ordway). If Rey could get past what Mia did, maybe Arturo can, too. Arturo might decide to sneak Mia out of Genoa City for the baby’s sake.