BY Heather Hughes on May 27, 2019 | Comments: one comment
Related : Soap Opera, Spoiler, Television, The Young and the Restless 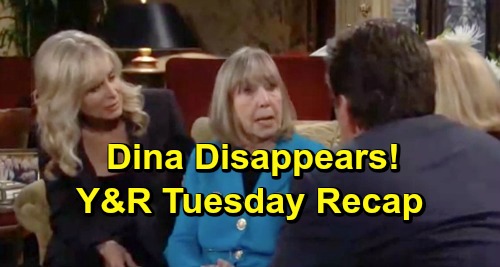 The Young and the Restless (Y&R) spoilers recap for Tuesday, May 28, tease that there’ll be some heartbreaking moments for the Abbott family. Dina Mergeron (Marla Adams) will get snappy with Traci Abbott (Beth Maitland) before Ashley Abbott (Eileen Davidson) arrives. Unfortunately, Dina won’t recognize Ashley. She’ll ultimately leave the room while the rest of the fam plans the big move.

Traci will be upset about putting Dina in a memory care facility, but Ashley will help her cope with the decision. Abby Newman (Melissa Ordway) and Jack Abbott (Peter Bergman) will show up next. As they all discuss how hard it’ll be to break the news, Dina will walk in and announce she already knows. She’ll be convinced that her family simply wants rid of her.

Once Kyle Abbott (Michael Mealor) arrives, he’ll be baffled by all this. A crying Dina will seek Kyle’s help and refuse to leave her home. After Dina exits again, Kyle will get updates on the situation and hate it just as much as everyone else. However, it’s what has to be done. The Abbotts will try to coax Dina out of the den, but Kyle will discover that she took off her tracker bracelet and disappeared!

Thankfully, Dina won’t go too far. Jack and Ashley will end up finding Dina in the park, where she’ll be happily listening to Tessa Porter (Cait Fairbanks) perform. Once Tessa finishes her song, she’ll chat with Dina, Jack and Ashley. After Tessa hears about the facility, she’ll offer to come play for Dina and her new friends. The suggestion will eventually leave Dina more open to the change.

At the coffeehouse, Cane Ashby (Daniel Goddard) to sign the last divorce documents. He’ll also hear about Neil Winters’ (Kristoff St. John) will reading. Since Cane is listed in the will and believes he should support Lily Ashby (Christel Khalil), he’ll agree to attend.

Afterward, Cane will head over to the Abbott mansion. He’ll comfort a distraught Traci as she awaits info from the Dina search party. Once Traci hears that Dina’s fine, she’ll open up to Cane about her struggles and he’ll do the same. They’ll embrace in gratitude for each other’s support.

Next, Dina will return home to pack up her belongings. She’ll worry no one will like her at the facility, but Jack will offer reassurance. He’ll point out that she already made a friend in Tessa. Y&R spoilers say Dina will prepare to leave, which will bring tears for Traci. She’ll feel like it’s the last time Dina will ever walk out that door, so Ashley will hold her sister.

At the cottage, Mariah Copeland (Camryn Grimes) will arrive and realize Rey Rosales (Jordi Vilasuso) moved in. She’ll be on board with Sharon Newman’s (Sharon Case) decision and suggest that they have to grab happiness when they can.

The Young and the Restless spoilers say Nikki will relay kidnapping fears. She’ll fear that Adam might try to swipe Christian Newman (Jude and Ozzy McGuigen). Nick will admit that Adam has declared war, so this fight could get ugly. At Society, Mariah will be brought up to speed on Adam over lunch with Sharon. It won’t be long until Nick appears with Nikki.

After Nick warns Sharon about Adam, he’ll waltz off with his mom and get a warning in return. Nikki will think Nick should be careful about what he says in front of Sharon. Adam still has a connection with his ex, so it’s wise to be wary. Once Sharon pops by their table, she’ll mention that Rey moved in. That’ll give Nick a big idea, which will lead him to Sharon and Rey’s place later.

Nick will offer Rey the head of security job at Dark Horse. He’ll allude to Rey taking care of some personal matters as well, so Rey will realize this is really about Adam. Over with Sharon, she’ll show up at Devon Hamilton’s (Bryton James) for the will reading. As others arrive, Michael will head upstairs to summon Devon.

Back at Society, Abby will be appreciative of Tessa’s help with Dina. After Tessa explains her issues with Ana Hamilton (Loren Lott), Lola Rosales (Sasha Calle) will suggest she could sing at Society. Abby will like the sound of that, so she’ll offer a performance gig to a grateful Tessa.