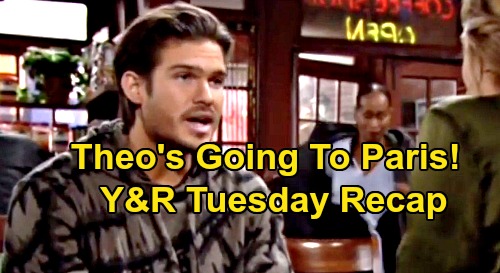 The Young and the Restless (Y&R) spoilers recap for Tuesday, November 19, teases that some hot drama’s brewing. We should note that Tuesday’s episode may be preempted for impeachment hearings coverage. The show will likely choose to push back Tuesday’s episode to a later date, so just keep that in mind.

Now let’s get to all the action. For starters, Phyllis Summers (Michelle Stafford) will spot Phillip “Chance” Chancellor (Donny Boaz) at the Grand Phoenix. She’ll mention Chelsea Lawson’s (Melissa Claire Egan) getting grilled by the GCPD regarding her Simon Black (Jeffrey Vincent Parise) link. Chance will ask to see Abby Newman (Melissa Ordway), but Phyllis will overhear his phone conversation about a flight to the Maldives soon after.

As for Abby, she’ll wish Nate Hastings (Sean Dominic) good luck at his hearing before she joins Chance. To keep Nate from being distracted, Amanda Sinclair (Mishael Morgan) will suggest a change of venue. She’ll take him to Crimson Lights, where they’ll do some last-minute strategizing.

Back with Phyllis, she’ll pester Chance once again. Phyllis will bring up the Maldives as well as Chance’s connection to Adam Newman (Mark Grossman) in Vegas. She’ll fish for information, but Chance will just want to know what her endgame is.

Afterward, Phyllis will tell Abby that Chance is heading out of town. She’ll think they deserve to know what’s up if this involves Simon and Chelsea, but she’ll shut down Abby’s idea to ask Chelsea herself. They can’t trust that what Chelsea tells them will be the truth.

The Young and the Restless spoilers say Abby will join Chance, who’ll ask about scanning the security system. Chance will note that his instincts told him Abby would be more receptive than Phyllis. After the scan, Chance will realize someone reinstalled the software overnight. He’ll point to a cover-up and suggest someone might’ve used a backdoor to the wi-fi. Chance will suggest that person would have access to all the customers’ info and could use it however he or she wants. A livid Abby will send a glare in Phyllis’ direction.

At Society, Kyle Abbott (Michael Mealor) will need some advice from Mariah Copeland (Camryn Grimes). He’ll fill her in on the situation with Billy Abbott (Jason Thompson), so Mariah will think it sounds like Billy’s making an effort. Kyle will appreciate that Billy sees Theo Vanderway (Tyler Johnson) for who he really is. He’ll mention that Summer Newman (Hunter King) understands his toward Theo as well.

Mariah will view Summer’s kindness over this as a red flag. She’ll feel like Kyle’s refusing to see what’s right in front of him and warn about Summer’s past behavior. If Kyle isn’t careful, he could wake up to find that Summer’s ruined his marriage.

As for Theo, Mariah will think he deserves another chance. She’ll allude to her past mistakes and getting another chance of her own. Y&R spoilers say Kyle still won’t trust Theo, but Mariah will convince him to give his cousin a shot.

Back at Crimson Lights, Theo will give Summer updates on Ashley Abbott’s (Eileen Davidson) job offer. Summer will admit it’d be boring without Theo around, but she won’t want to hold him back. She’ll suggest doing the whole long-distance thing and ask Theo to let her know once he makes a decision.

Later, Theo will eavesdrop as Lola Abbott (Sasha Calle) chats with Nate and Amanda. He’ll hear Lola mention that she couldn’t be happier with Kyle, so he’ll look a little glum. Lola will join Theo, who’ll still be mulling over what he should do. Lola will think Theo can go after opportunities and still hold onto who he is.

Next, Theo will give Ashley a call and let her know he’s in. At home, Kyle will inform Lola he’s decided to stop with all the paranoia and quit being a jerk. He’ll agree to give Kyle a chance to be the man he wants to be.

Over with Summer, she’ll talk to Phyllis about Theo’s job offer in Paris. Phyllis will gripe about Kyle and Lola being the ones who need to leave. Summer will annoy her mom by defending Kyle before ultimately taking off. Phyllis will turn her attention to Abby, who’ll suggest she found out something quite interesting about her.

Back with Amanda, she’ll speak with Nate about how well the hearing went. Amanda will think Victor Newman (Eric Braeden) gave a persuasive speech in defense of Nate. It won’t be long until Nate receives great news: he can keep his medical license. Nate will offer his gratitude to Amanda and embrace her, so it sounds like these two are growing closer.