BY hellodrdavis on November 19, 2019 | Comments: one comment
Related : Soap Opera, Spoiler, Television, The Young and the Restless 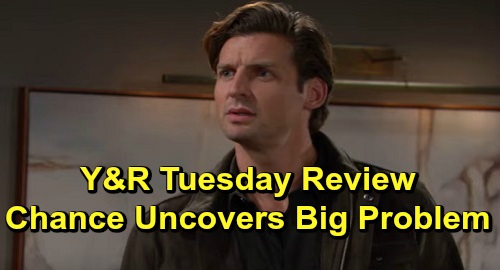 The Young and the Restless spoilers review for Tuesday, November 19, tease that things are heating up on the CBS drama. But before we get to that, we have a programming note to pass along. There are impeachment hearings scheduled for Tuesday in both the morning and the afternoon, so there’s a very good likelihood that Tuesday’s show will be pre-empted. But in the event the show airs, here’s what you can expect.

First off, Nate Hastings (Sean Dominic) will meet with Amanda Sinclair (Mishael Morgan) at The Grand Phoenix in advance of his medical board hearing. She’ll want to do some last-minute prep, but he’ll get distracted by Abby Newman (Melissa Ordway), who will be working in the lobby. Amanda will then drag Nate to Crimson Lights, where she’ll practice her opening statement and give him pointers on his statement for the board.

They’ll go off to the hearing, and when they return to Crimson Lights, Amanda will remark on how well Victor Newman (Eric Braeden) did in standing up for Nate and taking responsibility for faking his own death. Nate will sincerely thank Amanda and will say that he’ll never forget how hard she fought for him. Nate will then get a call with the good news that he won his case and gets to keep his medical license. He and Amanda will hug happily.

Meanwhile, on the new episode of Y&R on Tuesday, November 19, Phyllis Summers will encounter Chance Chancellor (Donny Boaz) at The Grand Phoenix and pester him for information about Simon Black (Jeffrey Vincent Parise) and his connection to Chelsea Lawson (Melissa Claire Egan). She’ll overhear him on the phone talking about his plan to go to the Maldives and fish for information about that, too, but he’ll stay mum.

Later, Chance will approach Abby and offer to run a check on the hotel’s security system. He’ll run some diagnostics for her using a laptop, and he’ll find something distressing – the hotel’s security system was reinstalled overnight, and the original installation was wiped, indicating a coverup of some sort. Chance will explain that the worst-case scenario is that someone installed a back door into the wifi system, so that anyone logged into wifi could have been hacked.

Abby will be furious, and she’ll immediately suspect that this has everything to do with Phyllis. Later, Abby will angrily confront Phyllis, who will innocently wonder if Abby learned anything from Chance about Chelsea or Simon Black. Abby will say that she didn’t, but that she learned something very interesting about Phyllis.

Finally, Theo Vanderway (Tyler Johnson) will talk with Summer Newman (Hunter King) at Crimson Lights about his job offer. He’ll describe the opportunity without telling her that it was Ashley Abbott (Eileen Davidson) who made him the offer, then reveal the source. Summer will be stunned, but she’ll want to be supportive and she’ll say that while she’d miss him, she wouldn’t want to hold him back.

Still, Theo won’t be decided, and later he’ll see Lola Abbott (Sasha Calle) come in. He’ll tell Lola that some guy he knew recently called him and wanted money since he’s a part of the Abbott family now. Lola will be able to relate since her father was in town recently and wanted money from her. Theo will then ask her what she’d think of him if he took hold of the opportunities that being an Abbott afforded him.

Lola will relay the story about how Kyle Abbott (Michael Mealor) bought her an expensive purse and she freaked out because she didn’t want to lose who she was. Theo will feel that she can relate to him and understands his dilemma. She’ll tell him to embrace the opportunities and allow himself to enjoy them while still keeping a strong sense of who he is. Theo will say that this is exactly what he needed to hear, and later, he’ll call Ashley and tell her that he’s in.

We’ll see how Kyle reacts to all of this – he might not be too happy to learn that Theo is getting a major opportunity within the family that Lola essentially persuaded him to do, especially when he’s getting treated so poorly by Billy Abbott (Jason Thompson) right now at Jabot. He might not appreciate Theo getting a great whirlwind opportunity in Paris while he has to deal with constant attitude and putdowns from Billy.