BY Heather Hughes on November 19, 2019 | Comments: one comment
Related : Soap Opera, Spoiler, Television, The Young and the Restless 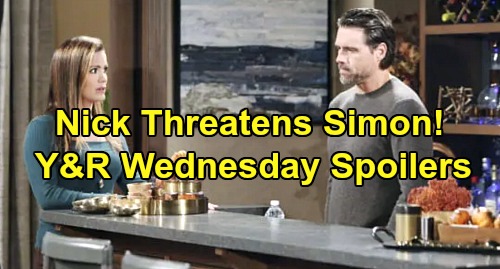 The Young and the Restless (Y&R) spoilers for Wednesday, November 20, tease that some surprises are in store. Before we get to those, we should mention the ongoing impeachment hearings coverage. Due to that news coverage, this episode may be bumped to a later date along with others airing this week.

However, you can count on Wednesday’s episode to be shown on screen or online eventually, so we might as well give you some hot Y&R spoilers! There’s no reason you should be left in the dark just because the schedule’s off a little. With that in mind, let’s discuss what’s coming up in Genoa City.

For starters, Billy Abbott (Jason Thompson) will make a move that stuns Jack Abbott (Peter Bergman). Y&R fans know Billy recently had a therapy session, which led him to realize he might be self-sabotaging. Billy returned to Kyle with an apology and the promise to do better. Will Jack be taken aback to find them actually getting along?

That’s one possibility to consider. Another one is that Billy’s plan won’t stick. We really can’t trust him not to let his dark side creep in once again. Whatever the case, Jack will suspect something strange is going on with his brother.

Other Young and the Restless spoilers say Chelsea Lawson (Melissa Claire Egan) will try to patch things up. She’s got several people she needs to apologize to, but Adam Newman (Mark Grossman) and Nick Newman (Joshua Morrow) already received theirs. Perhaps Chelsea will head back to the Grand Phoenix next and express remorse to her business partners.

Abby Newman (Melissa Ordway) and Phyllis Summers (Michelle Stafford) are clearly furious with Chelsea right now. Chelsea created another major scandal, which is the last thing they needed. After the Molly party debacle, a second disaster is even more difficult to recover from. Nevertheless, Chelsea might show up and argue that she’ll do whatever she can to fix this.

Perhaps Chelsea will try to make amends with Victor Newman (Eric Braeden) and Nikki Newman (Melody Thomas Scott), too. Chelsea realizes she’s tanked Nick’s latest dream, so she’ll continue her apology tour and hope she can keep moving forward. She’s got a tough battle ahead of her.

As for Nick, he should be meeting with Simon Black (Jeffrey Vincent Parise) soon. The Young and the Restless spoilers say Nick will deliver a fierce threat, so Simon may be on the receiving end. Something tells us Nick won’t exactly leave Simon shaking in his boots! Simon isn’t a man who scares easily, especially not if somebody like Nick is barking out warnings.