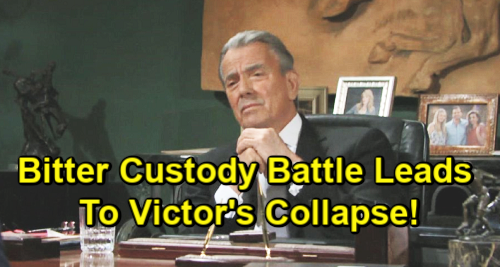 The Young and the Restless (Y&R) spoilers tease that Victor Newman (Eric Braeden) will turn against the golden boy. He’s tried to be patient with Adam Newman (Mark Grossman) since his son’s been through a lot. Victor’s vindictive moves led to a terrible chain reaction, which ended with Adam’s presumed death in that explosion.

This father was desperate to make amends and repair his family, especially since he’s battling a rare blood disease. Unfortunately, Adam’s determined to get what he wants and he’s refusing to let anyone stop him.

That’s why Victor will order Adam off his property later this week. He’ll make it clear that enough is enough and draw the line when it comes to Adam’s dark behavior.

Of course, Adam won’t particularly care – at least he won’t act like he does. There may be part of Adam that suffers due to Victor’s animosity, but another part of him may thrive off it. Adam is a lot like his dad, so he seems to get a certain rush out of going up against enemies. Newman’s rise to the challenge, and that’s exactly what Adam will be prepared to do.

The Young and the Restless spoilers say Adam will continue his fight for full custody of Christian Newman (Jude and Ozzy McGuigen). How far will Victor go to stop him? Vic certainly doesn’t want to affect the poor kid’s well-being. It could do serious damage if Christian is yanked out of Nick’s home and given to a stranger, even if that stranger is his biological father.

Victor may help Nick Newman (Joshua Morrow) and Michael Baldwin (Christian LeBlanc) as they work to disqualify Adam as a parent. He may feel guilty for unleashing a monster and do his best to help. However, that mission could lead to growing health woes for Victor. Having so much strife in the family can’t be good for Victor’s recovery plan.

Scary Moments Down The Road

The odds already aren’t in Victor’s favor, so anything that hinders him further could spell disaster. Y&R fans can expect this custody battle to get awfully bitter. Will things get out of hand when its time for court?

If Adam emerges victorious, will Victor go off in a big way? It’s easy to imagine the outcome of all this leading to Victor’s collapse. He may find himself in a life-or-death situation at the hospital.