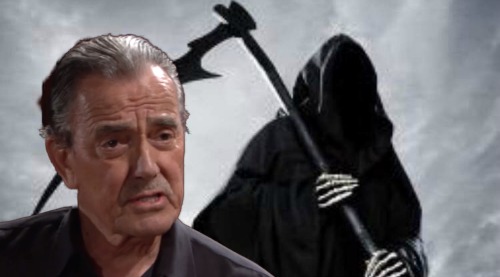 The Young and the Restless (Y&R) spoilers tease that the Newman family drama will rev up, but one thing will remain constant through it all. Unfortunately, we’re talking about Victor Newman’s (Eric Braeden) slow and steady decline. He’s got a rare blood disease, which isn’t really responding to Dr. Nate Hastings’ (Sean Dominic) so far. As a result, The Moustache’s health will take some hard hits.

However, Victor has vowed to fight and beat the odds. When he was first diagnosed, Victor also urged Nate to look into all available options – no matter how experimental. Since Victor’s initial treatments aren’t producing the results Nate was hoping for, will it be time to try something riskier soon? If Victor runs out of other options, he may be willing to do something drastic.

Let’s say there’s some potential cure out there that could save Victor from a grim fate. The catch might be that it could backfire and rush him into the grave sooner. There are always concerns like that when it comes to experimental treatments and procedures. The benefits have to outweigh the risks, which they would in Victor’s case.

The Young and the Restless spoilers say Victor will make a huge decision during the week of June 24-28. That could be about something related to Adam Newman (Mark Grossman), Nick Newman (Joshua Morrow) and who Victor chooses to support in the custody fight. However, it’s possible this could be about a major choice regarding Victor’s health care.

Nikki Newman (Melody Thomas Scott) might worry about a treatment that’s unproven and has potentially killed other trial participants. She would probably feel like Victor needed to hang in there and give Nate a shot at curing this some other way. Nikki could argue that if nothing else, Victor might miss out on his chance to say goodbye.

If these turned out to be Victor’s final months, Nikki would want to make the most of them. They can’t do that if an experimental treatment leaves Victor six feet under sooner. Of course, Y&R fans can expect Victor to survive and thrive in the end. Eric Braeden shows no signs of slowing down, so it doesn’t look like he’ll be stepping away from the role anytime soon.