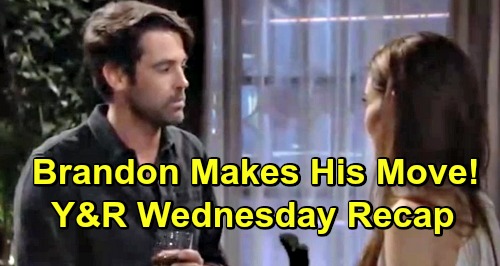 The Young and the Restless (Y&R) spoilers update and recap for Wednesday, April 3, tease that Victoria Newman (Amelia Heinle) will be determined to enjoy herself without distractions. She’ll ignore Billy Abbott’s (Jason Thompson) attempts to get in touch, which will leave him worried. Jack Abbott (Peter Bergman) will downplay the drama and turn Billy’s attention to Jabot. It’s clear that they have a lot of work to do!

Meanwhile, Summer Abbott (Hunter King) will let Kyle Abbott (Michael Mealor) know her doctor cleared her for sex. She’ll convince him to make love to her, but he’ll look at Lola Rosales’ (Sasha Calle) picture on his phone afterward. Once Kyle steps away, Summer will pick up his phone and look glum over the ex he was longing for.

Next, Summer and Kyle will help Jack out during a strategy session. Billy will join in this crucial meeting about Jabot’s future. Summer will have some impressive social media ideas, which will spark some from Kyle as well. They’ll end up being a good team, so this should be a bonding experience.

In Las Vegas, Victoria will turn away someone asking for Lizzie through the door. A man named Brandon Rose (Mitch Eakins) will have the wrong room number, but he’ll think Victoria’s voice sounds appealing. Brandon will slip a poster for his band under the door and promise a VIP pass for an upcoming gig. He’ll want to see if Victoria is as gorgeous as she sounds.

Later, Victoria will take a selfie with Brandon and someone else from the band. She’ll assure Brandon that the show was great and start talking about her work as an artist. After Victoria gabs about galleries briefly, Brandon will call her Victoria. It seems he’s already heard of Ms. Newman, but he’ll still be quite interested.

Brandon will give Victoria his number before he goes, so she’ll have a new option to put in her phone. Back in Genoa City, Billy will look at his own phone and realize Victoria’s been hanging out with a group called “The Bloody Thorns.” Y&R spoilers say he won’t be pleased with Victoria’s unusual behavior.

At Crimson Lights, Mariah Copeland (Camryn Grimes) will have a gift for Tessa Porter (Cait Fairbanks). She bought back the guitar Tessa pawned, so she’ll want her to give it another shot. Tessa will insist on playing alone since she might be rusty, but she’ll thank Mariah for believing in her before she leaves.

At Sharon Newman’s (Sharon Case), Mariah will barge in on her mom’s dinner with Rey Rosales (Jordi Vilasuso). She’ll realize they’re an item, so Sharon will hope Mariah can be happy for them. They’ll discuss how Rey did right by Sharon after the arrest fiasco. Mariah will also bring up Tessa’s dropped blackmail charges, which Sharon will approve of. She’s all about fresh starts now.

Mariah will be a bit wary since Rey is still married to Mia Rosales (Noemi Gonzalez), but he’ll promise it’s just on paper. On the fire escape of Mariah and Tessa’s apartment, Tessa will struggle to get back into the groove. Thankfully, Mariah will arrive soon after and offer a pep talk. Tessa will end up singing one of her old songs to boost her confidence, so they’ll share a nice moment.

Back with Rey and Sharon, the mood will turn steamy as he carries her up to the bedroom. Across town, The Young and the Restless spoilers say Devon Hamilton (Bryton James) will bond with Elena Dawson (Brytni Sarpy). They’ll chat about the loss of Hilary Hamilton (Mishael Morgan) before Elena share a little more about herself.

After Elena reveals she’d like to get out more, Devon will think maybe they could go out together. Things will get a bit awkward, but they’ll agree to have coffee sometime. Before Devon heads to bed, he’ll remind Elena of their plans with a smile.