BY Heather Hughes on April 2, 2019 | Comments: one comment
Related : Soap Opera, Spoiler, Television, The Young and the Restless 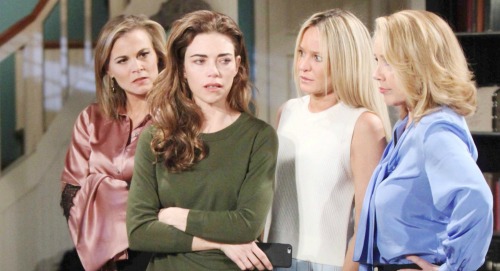 The Young and the Restless (Y&R) spoilers reveal that the soap world’s buzzing with some hot stories, so we’ve got a news roundup for you. For starters, people are still in shock over Y&R’s decision to fire Gina Tognoni and bring Michelle Stafford back as Phyllis Summers. The move brought joy for many fans, but it brought heartbreak and outrage for many others.

Several cast members showed their support for Tognoni, so let’s look at what they had to say. After Tognoni posted a message of gratitude to the CBS soap on Twitter, Eileen Davidson (Ashley Abbott) sent a reply. She simply said, “Love you Gina!!!!” Christian LeBlanc (Michael Baldwin) also sent a string of heart emojis to show his love for the booted actress.

Even The Young and the Restless’ composer and music supervisor weighed in. RC Cates said, “You contributed greatness to YnR! You will be missed!” Jordi Vilasuso (Rey Rosales) eventually posted a lengthier message about how he wished Rey and Phyllis could’ve had more scenes. It’s clear that Vilasuso respects Tognoni’s work and enjoyed getting to know her behind the scenes.

“You are the epitome of class and I am heartbroken over this,” Vilasuso said. “I always wished for us to share more screen time together and enlightened by our chats BTS. God bless you and may your light continue to shine.” Alice Hunter (“Kerry Johnson” aka Dominique Caroll) also weighed in with some heartfelt words for Tognoni, but she later addressed some big news of her own.

Of course, we’re talking about Hunter’s exit from The Young and the Restless. Hunter had fun seeing everyone’s response to her character’s dark side. She even joked about how Kerry aka Dominique’s story changed so many times.

“I canNOT with Twitter reactions today, I’m laughing so hard…if you’ve ever had a theory about Kerry and her intentions, at some point you were probably right,” Hunter said. “But they let me go out with a bang and I’ll always be grateful for that.” She also posted a great pic of herself along with several other Y&R cast members. Hunter once again thanked the CBS soap for the opportunity, so it’s nice that she enjoyed her time there.

The Young and the Restless spoilers say Jack Abbott (Peter Bergman) will need to move on, but he’ll have Jabot and a fierce battle with Ashley to keep him busy. It looks like there could be some Dina Mergeron (Marla Adams) drama coming up as well.

Cathy Marks, who previously played a younger version of Dina, will return in a flashback scene on April 16. Perhaps Jack will recall a memory of his mom as she continues to slip away. That’s it for your Y&R news roundup! We’ll give you updates as other details emerge. Stay tuned to the CBS soap and don’t forget to check CDL often for the latest Young and the Restless spoilers, updates, and news.