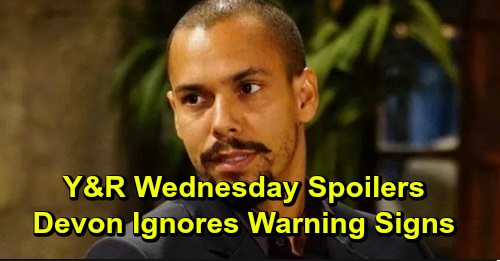 The Young and the Restless (Y&R) spoilers for Wednesday, December 18, tease that Devon Hamilton (Bryton James) will secretly seek justice. Despite Amanda Sinclair’s (Mishael Morgan) repeated denials, Devon will remain convinced that she was in on the will scam. Of course, he’d want Amanda out of the picture no matter what. Amanda’s resemblance to Hilary Hamilton (Mishael Morgan) is really taking a toll on Devon mentally.

Devon recently received a very informative dossier on Amanda, which he’ll continue to mull over in Wednesday’s episode. Y&R fans know Amanda hired a private firm to wipe out her history. It’s made it virtually impossible for the average person to find out anything about her online. On Monday, Devon also discovers that Amanda and her ex-fiancé filed restraining orders against each other.

Anyone with common sense would look at those facts alone and assume domestic violence was involved. Amanda legally wanted to keep this man at a distance and erased the trail that could help him find her. It seems obvious that Amanda’s hiding because this guy is incredibly dangerous.

Sadly, Devon will be too clouded by his previous view of Amanda to accept that she’s the victim here. On Wednesday, he’ll focus on using this dirt to his advantage, but he’ll stuff the file in a drawer when Elena comes downstairs. It looks like Elena will notice Devon poking around, but she’ll keep her mouth shut until after he leaves. That’ll give Elena a chance to do some snooping as well.

Now you’d think that a medical professional, who’s undoubtedly seen the familiar signs of an abusive situation, would catch on. Unfortunately, Elena will only concentrate on Amanda’s secrecy. She’ll get back on the Amanda hate bandwagon, which will catch Nate Hastings (Sean Dominic) off guard later.

Let’s hope Nate will be the voice of reason in all this. It sounds like Amanda’s already been through enough as it is! This vicious ex of hers is bound to show up in Genoa City sooner or later – and it’ll probably be Devon’s fault if he keeps digging.

In the meantime, Jack Abbott (Peter Bergman) will take charge at Jabot. Kyle Abbott (Michael Mealor) recently delivered an ultimatum, which convinced Jack to try being co-CEOs with his son. However, it doesn’t sound like Jack will find it easy to share power. If Jack’s taking charge, perhaps Kyle will feel like he’s a co-CEO in name only. He may grow frustrated with his dad’s lack of faith in him.

Of course, this could also involve taking charge of a battle between Kyle and Theo Vanderway (Tyler Johnson). If a disagreement breaks out, Jack may intervene and become the deciding vote. We can guess who he’d side with since he’s all about making Theo feel welcome!

Finally, The Young and the Restless spoilers say Victor Newman (Eric Braeden) will share something with Victoria Newman (Amelia Heinle). The show previously released info for the wrong date, even with the preemption adjustment. Thankfully, they seem to have corrected things now, so Wednesday should be when Victoria hears her father’s confession.

Victor seems pretty bored in retirement – and viewers are honestly a bit bored with sofa Gramps, too. Maybe Victor will admit he’s wrestling with what’s next just like Billy Abbott (Jason Thompson) is. Regardless, you can bet that Victoria will give Victor plenty of love and support.