BY Heather Hughes on December 4, 2019 | Comments: one comment
Related : Soap Opera, Spoiler, Television, The Young and the Restless 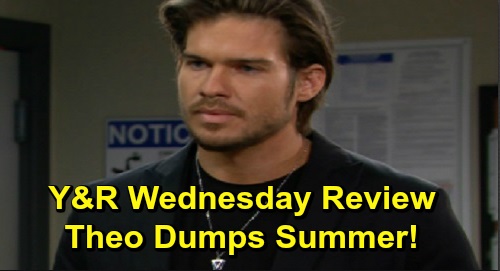 The Young and the Restless spoilers review for Wednesday, December 4 tease that Billy Abbott (Jason Thompson) will be feeling directionless. He and Victoria Newman (Amelia Heinle) will talk the morning after the big storm and Billy will withhold the fact that he was with Amanda Sinclair (Mishael Morgan). Once Victoria steps out of the room, he’ll wonder to himself why he didn’t tell her about Amanda. He’ll think that maybe Victoria would think he was drinking too much or was on the make.

He’ll then think to himself that he just wants to feel normal, and that he felt guilty even though there was no reason to. After Victoria leaves for work, Billy will add “figure out who I am and what I want to do with my life” to his to-do list, then he’ll erase it and go to Society, where he’ll encounter Amanda having coffee. They’ll be happy to see each other and have an easy conversation until Victoria texts saying that he needs to pick up Katie Abbott (Sienna Mercuri).

At the end of the day, Billy will be waiting for Victoria at home, who will breeze in and announce that she can’t stay because she’s got to attend a cocktail party for a business partner. Billy will understand, but when she leaves, he’ll look completely unhappy. One wonders whether he’s actually developed an attraction to Amanda resulting from feeling neglected by Victoria. Time will tell, but it’s certainly looking like this could be the case.

Meanwhile, on the new episode of Y&R on Wednesday, December 4, Devon Hamilton (Bryton James) will be tired and stressed. He’ll have been up half the night working and Elena Dawson (Brytni Sarpy) will try to get him to relax. She’ll nag and he’ll push back, saying that the things on his plate are “top priority.” She’ll then complain about feeling that their relationship has gone by the wayside.

Devon will apologize, and Elena will leave for work upset. Exhausted, Devon will rest on the couch and have a disturbing dream in which Hilary Hamilton (Mishael Morgan) is alive and then turns into Amanda before his eyes. He’ll be startled by the whole thing and will decide to reschedule his day to make time to take Elena to lunch. They’ll dine at Society and he’ll tell her that he’s sorry for neglecting her and that she’s his top priority.

Finally, Theo Vanderway (Tyler Johnson) will absolutely stun Summer Newman (Hunter King). They’ll meet up at Crimson Lights and he’ll mention his desire to move out of the hotel, and she’ll assume that he’s wanting them to move in together. She’ll shut that down, saying that it would be too much togetherness. He’ll give that some thought, and later at Jabot he’ll launch into a “breakup” conversation with her, saying that he wants to focus on his work now.

Summer will soon realize that he’s dumping her, and she’ll be horrified. He’ll go on to say that he’s been giving it a lot of thought, and that they need to cool it – after all, they never talk about stuff that matters, and she’s been keeping him at arm’s length for a while now. He’ll note that there’s a distance in their relationship that comes from her, and that he’s sure they can make this work in the workplace, since she made things work with her ex.

Summer will then wonder why he’s bringing up Kyle Abbott (Michael Mealor), and he won’t really answer. She’ll be stunned as he walks out to get back to work. Of course, it probably won’t be long before Kyle finds out about the breakup and somehow holds it against Theo. Kyle’s long said that Theo would end up hurting Summer, so Summer will probably predictably run to Kyle with her hurt feelings…something that could bring Kyle and Summer closer in the end.