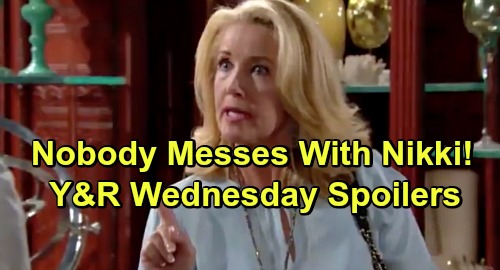 The Young and the Restless (Y&R) spoilers for Wednesday, February 20, tease that the CBS soap will air a special tribute to Nikki Newman (Melody Thomas Scott). Y&R will celebrate Nikki’s 40 years in Genoa City with a fun trip down memory lane. This will definitely be a can’t-miss episode for loyal fans.

Nikki is currently behind bars thanks to the cover-up madness, but she’ll find ways to keep her mind occupied and even smile a bit. Y&R’s Twitter account put out a great video featuring lots of old Nikki clips, but those are only the beginning. There’s much more to come once Wednesday’s reflection episode kicks off.

The Young and the Restless spoilers say Nikki will remember the good times as well as the bad. We all love a nice mix of heartwarming scenes and extreme drama, so the show will undoubtedly deliver. The highs and lows are what keep viewers tuning in year after year!

Melody Thomas Scott recently appeared on The Talk to offer some hints about what’s to come. She’s beyond grateful to The Young and the Restless for honoring Nikki’s history with the show. “I was so thrilled that they did this,” Scott said. “It’s truly, really the life of Nikki in the entirety of the episode.”

Scott explained that Nikki would be writing a letter to her grandkids in jail. This is obviously a tough time for Nikki, but she’ll find comfort in telling her story. “”I have to narrate it, I’ve got a voiceover, a long voiceover,” Scott noted. “And then, as I’m thinking about all these different times in my life, I can’t believe I’m referring to me as her, her life, then we see the flashbacks.”

Nikki will want her grandkids to know who she is and how she got to this point. She’ll also want them to know how much their family means to her. Nikki would do anything for the people she loves, which is exactly why she’s stuck in lockup right now.

Scott went on to say that both faithful Y&R watchers and newer fans would appreciate this tribute. She promised that “all of the clips have not been seen since they were first aired,” so it sounds like the show will feature some real gems. The Young and the Restless spoilers say they’ll take a look back for this special occasion, but don’t worry. The story will heat right back up once Thursday’s new Y&R episode, February 21, rolls around.

Are you excited about Nikki’s 40-year anniversary episode? We’ll give you updates as other Y&R news comes in. Stick with the CBS soap and don’t forget to check CDL often for the latest Young and the Restless spoilers, updates, and news.

Nobody does it like Nikki Newman! Congratulations to @MelodyThomasSco on her 40th anniversary with The Young and the Restless. 🎉 Don’t miss her special tribute episode this Wednesday on #YR! pic.twitter.com/Hkyxi3AyU2