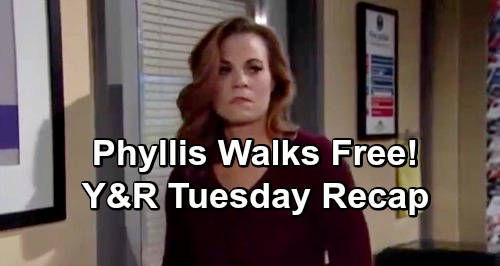 The Young and the Restless (Y&R) spoilers update and recap for Tuesday, February 19, tease that Mia Rosales (Noemi Gonzalez) will have a moment of panic. When she shows up at the hospital, Mia will notice that Lola Rosales (Sasha Calle) isn’t in her bed. She’ll apparently fear that Lola is dead, but she’ll calm down when she learns Lola just needed some tests.

Mia will worry about getting caught, but she’ll still use the situation to her advantage. Y&R spoilers say Mia will promise to support Rey Rosales (Jordi Vilasuso), so maybe this can help her repair the damage. She has a lot to make up for since she called out Arturo Rosales’ (Jason Canela) name during sex, but she’ll hope for some progress.

Soon after, Summer Newman (Hunter King) will rush in. The Young and the Restless spoilers say Kyle Abbott (Michael Mealor) will immediately start ranting. He wanted to enjoy a peaceful Valentine’s Day at the cabin with Lola, but Summer ruined that plan. Kyle will even suggest that Summer might’ve attacked Lola, but she’ll shut down that idea and storm out.

Afterward, Arturo and Kyle will get into a fight in the waiting area. They’ll lunge at each other, but Rey will break things up. Meanwhile, Abby will comfort a crying Mia. She’ll think they need to put their feud on hold and just worry about Lola. The Young and the Restless spoilers say Rey will join Mia eventually and insist that the person who did this will pay.

At the police station, Christine Williams (Lauralee Bell) will reluctantly make a deal with Phyllis Summers (Gina Tognoni). Since Phyllis will claim she’s the only one with physical evidence, Christine will think she has to go for it. She’ll present Phyllis with the immunity paperwork, but she’ll make it clear that all the facts have to check out. Christine won’t stand for any deception or twisting.

After signing, Phyllis will assure Christine that her story will line up with what Sharon Newman (Sharon Case) said. She’ll go through the familiar details before they get to the proof. Phyllis will bring up the fireplace poker, the cell phone and the footage of them moving J.T. Hellstrom’s (Thad Luckinbill) body to the garage. She’ll explain how Christine can get her hands on what she needs.

Phyllis won’t be able to spill where J.T.’s body is since she doesn’t know, but she’ll manage to bring Mariah Copeland (Camryn Grimes) into this. She’ll let Christine know that Mariah was in the loop, so more trouble’s brewing. At Crimson Lights, Mariah will lean on Tessa Porter (Cait Fairbanks) for support. They’ll worry about the cover-up chaos even more once Mariah is summoned to the GCPD herself!

In the interrogation room, Christine will bring up the video to Mariah. She’ll admit she heard something about that, but she’ll try to avoid disclosing too much. The confirmation will be enough for Christine to let Phyllis go, but she’ll suggest this deal could come back to bite her with the others.

As for Mariah, she’ll return to Tessa at the coffeehouse and provide updates. Tessa will determine that the cops are just going to get the footage off the Dark Horse servers. They’ll both fear that this mess is about to explode.

It sounds like the excitement is revving up in Genoa City. We’ll keep you posted as other Y&R news comes in. Stay tuned to the CBS soap and don’t forget to check CDL often for the latest Young and the Restless spoilers, updates, and news.