BY Heather Hughes on February 18, 2019 | Comments: one comment
Related : Soap Opera, Spoiler, Television, The Young and the Restless 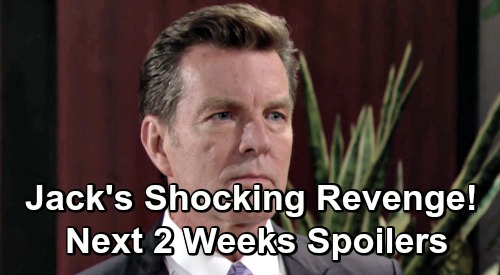 The Young and the Restless (Y&R) spoilers for the next two weeks tease that the action will heat up in Genoa City. During the week of February 18-22, Mia Rosales (Noemi Gonazlez) will get some disturbing news. She’ll learn Lola Rosales (Sasha Calle) was the one she attacked, not Abby Newman (Melissa Ordway).

Mia will also realize she lost an earring, but she won’t know where. It turns out it’ll be in the snow near the Abbott pool, so that could come back to bite her. Later, Kyle Abbott (Michael Mealor) will hurl accusations at Summer Newman (Hunter King). He’ll think she must’ve been so livid over losing him that she went after Lola and shoved her in the pool.

At the police station, a different crisis will be underway. Phyllis Summers (Gina Tognoni) will pressure Christine Williams (Lauralee Bell) to let her cut a deal. She’ll promise to offer every detail about J.T. Hellstrom’s (Thad Luckinbill) death, including some physical proof she’s been holding onto.

Mariah Copeland (Camryn Grimes) will be brought in for questioning soon enough. She’ll try to dance around what she knows to avoid implicating Sharon Newman (Sharon Case) any further. Mariah will also want to leave Tessa Porter (Cait Fairbanks) out of the chaos, but Phyllis’ big mouth could present a problem.

When Victor Newman (Eric Braeden) realizes Phyllis could take down Nikki Newman (Melody Thomas Scott) and Victoria Newman (Amelia Heinle), he’ll be furious. Victor will offer a stern warning and hope that Phyllis doesn’t want to tangle with him. She’ll be sorry if she pushes Victor too far!

Nick Newman (Joshua Morrow) will have his world turned upside down by the end of the week, so that may involve Phyllis and her incriminating statements. She cares about Nick, but not enough to take the fall for this! Meanwhile, Devon Hamilton (Bryton James) will go through a rough patch. His grief will rev up again, so he’ll likely rely on Ana Hamilton (Loren Lott) to get over this hurdle.

There’ll also be a special tribute to Melody Thomas Scott as Y&R celebrates 40 years of Nikki Newman. The Young and the Restless spoilers say Nikki will take a trip down memory lane while in lockup, so that should be fun. You can check that episode out on Wednesday, February 20.

The week of February 25-March 1 will deliver even more drama. Mariah’s mayhem will get far worse, so she may not be able to protect Tessa as well as she’d hoped. The same goes for Mariah herself since she knew all the facts and didn’t come forward with them.

Over with Victor, he’ll have to take charge of a situation. The Young and the Restless spoilers say Victor will do whatever it takes to protect his family, so Y&R fans can expect quite a battle. Next, Nick will be at the end of his rope. His relationship with Phyllis could be in jeopardy if she crosses too many Newman lines.

Finally, Jack Abbott (Peter Bergman) will have revenge on his mind. He’ll seek vengeance on one unsuspecting Genoa City resident, but which one? The Young and the Restless will undoubtedly reveal something big between now and then, so more trouble’s brewing.

It sounds like some gripping scenes are coming up over the next two weeks. We’ll give you updates as other Y&R details emerge. Stay tuned to the CBS soap and don’t forget to check CDL often for the latest Young and the Restless spoilers, updates, and news.