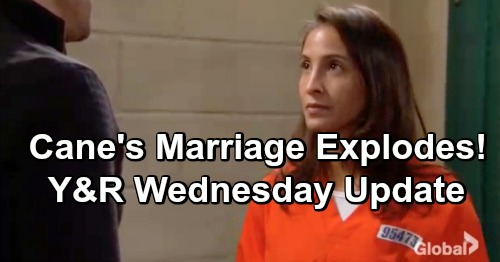 The Young and the Restless (Y&R) spoilers update and recap for Wednesday, January 16, tease that Nick Newman (Joshua Morrow) will raise Phyllis Summers’ (Gina Tognoni) suspicions. He’ll admit that he now fully believes Victor Newman (Eric Braeden) is innocent. Nick will talk about his efforts to help Victor and get him back home with Nikki Newman (Melody Thomas Scott) where he belongs.

Phyllis will rant about Victor’s other wrongdoings and wonder why Nick’s suddenly so determined to believe him now. She’ll question what Nikki said, but Nick will excuse himself to get some air. At the coffeehouse, Sharon Newman (Sharon Case) will offer Arturo Rosales (Jason Canela) a check and her gratitude. He came through for Sharon by handling the furnace issues in Rey Rosales’ (Jordi Vilasuso) apartment.

Arturo will surprise Sharon by suggesting she should use another repairman next time. He’ll insist that he’s busy dealing with Abby Newman’s (Melissa Ordway) restaurant, but Mia Rosales (Noemi Gonzalez) is undoubtedly the bigger problem. Speaking of Mia, she’ll urge Rey to have a little fun with her in the apartment. After they make love, they’ll talk about why they’re good for each other.

Later, Mia will summon Arturo to talk about what happened between them – or at least what almost happened. She won’t be able to get Arturo off her mind, but he’ll feel like their near kiss was a mistake. Arturo won’t understand why Mia’s stirring all this up again. He’ll assure Mia that it’s all in the past and he’s moving on.

Other Young and the Restless spoilers say Nick will meet up with Rey. He’ll bring up the arson and insist that the person behind it must be framing Victor. Rey won’t understand Nick’s change of heart. He’ll feel like some secrets are being kept, but Nick will stay tight-lipped.

Next, Rey will talk to Sharon about their night at that motel. He’ll confess that Mia knows they were together, but not in the same room…or the same bed. Rey will bring up Mia’s trust and suggest that he doesn’t want to lose it. He’ll refuse to be anything like his father was.

The Young and the Restless spoilers say Cane Ashby (Daniel Goddard) will also visit Lily Ashby (Christel Khalil) on Wednesday. It won’t be something they scheduled, but Cane will really want to check in. Things will go pretty well at first. Lily will seem excited about the GED class she’s been assigned to teach. She’ll be happy that she’s making a difference behind bars.

When Cane tries to talk about the future, Lily will shut it down. She’ll think it’s too painful to discuss right now. Cane will shift gears and plan to read Mattie Ashby’s (Lexie Stevenson) essay, but Lily will have to get going. She won’t want to be late for her class. Cane will be annoyed, but Lily will feel like he hasn’t even been listening to her. She’ll tell Cane that she really needs his support.

Cane will take a jab by suggesting that he’s not the one who’s walking away. He’ll look after Lily as the guard takes her out, but he’ll be too late. It sounds like marriage is crumbling fast! We’ll give you updates as other Y&R news comes in. Stay tuned to the CBS soap and don’t forget to check CDL often for the latest Young and the Restless spoilers, updates, and news.