BY Heather Hughes on July 23, 2019 | Comments: one comment
Related : Soap Opera, Spoiler, Television, The Young and the Restless 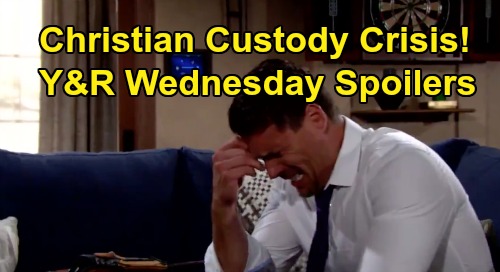 The Young and the Restless (Y&R) spoilers for Wednesday, July 24, tease that Jack Abbott (Peter Bergman) will have a double surprise when he returns from his trip to Paris. First, he’ll bring Ashley Abbott (Eileen Davidson) home with him! Traci Abbott (Beth Maitland) will be over the moon to have the gang back together. She’ll be even more thrilled when Jack reveals his next shocker.

Jack will explain that he’s called a truce with Ashley, which isn’t the shocking part since they basically did that after Neil Winters (Kristoff St. John) died. However, this truce is a bit more official now and will lead to big changes for the Abbotts. There have been rumblings about a possible merger between My Beauty and Jabot, but they could always start small with some collaborative projects.

Traci will think their working arrangement is great news, but Billy Abbott (Jason Thompson) will view it as a dangerous bombshell. He’ll make it crystal clear that he doesn’t trust Ashley, but his feelings about Adam Newman (Mark Grossman) might be creeping in here. Billy’s consumed with suspicions and vengeful desires, so some of those may be seeping into other areas of his life.

Still, it’s not like Billy’s trepidation is out of left field. Ashley indeed burned Jabot several times and perhaps hasn’t done enough to prove she can be trusted. On the bright side, Ashley may have the chance now that this truce is leading to new business opportunities.

Other Young and the Restless spoilers say Celeste Rosales (Eva LaRue) will push Lola Rosales’ (Sasha Calle) buttons again. It seems like there’s always some issue for these two to tackle. Celeste and Lola resolve one crisis just to kick off another!

Will wedding plans cause conflict this time around? Will that lead to another tense confrontation about Papa Rosales? Regardless, Lola will once again have a meltdown over her mother’s behavior. Across town, Victoria Newman (Amelia Heinle) will rise to the challenge. This may tie in with a Newman Enterprises crisis or possibly something related to Nick Newman’s custody battle.

Y&R fans know Victoria is committed to helping Nick keep Christian Newman (Jude and Ozzy McGuigen), so she’ll do whatever she can to stop Adam. If Nick needs anything at all, Victoria will gladly step up. Of course, she’ll also support declining Victor Newman (Eric Braeden) if need be. Victoria should find herself assisting several Newman family members as these storylines move forward.