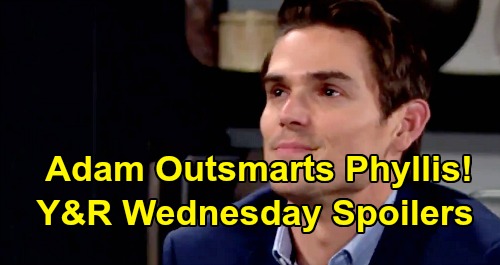 The Young and the Restless (Y&R) spoilers for Wednesday, July 31, tease that Phyllis Summers (Michelle Stafford) will deliver some surprising news to Nick Newman (Joshua Morrow). It sounds like she’ll fill Nick in on her recent partnership with Victoria Newman (Amelia Heinle). Victoria obviously isn’t Phyllis’ favorite person, but Phyllis was still willing to help her out through her position at Dark Horse.

As a result, many of Nick’s important properties have been transferred back to him. Of course, Nick tends to blame Phyllis for everything under the sun and probably won’t truly appreciate the gesture. Phyllis might get a “thank you,” but Nick may add that it’s the least she can do under the circumstances. He’s not happy Phyllis agreed to accept the CEO job in the first place.

The Young and the Restless spoilers say Jack Abbott (Peter Bergman) will also offer tough love to someone on Wednesday. Will Phyllis be on the receiving end? Phyllis will make a pitch to Jack and Billy Abbott (Jason Thompson) at some point this week. Perhaps Jack will decline her deal and suggest that Phyllis will have to make her own way.

Regardless, Phyllis will realize she’s been outmaneuvered before long. Adam will reveal he was able to keep one crucial property: Grand Phoenix Hotel. That should be a blow to Phyllis, but she’ll have a few tricks up her sleeve. She’ll be down but not out!

If Phyllis isn’t the one getting the tough love on Wednesday, perhaps her Jabot proposal will be a sneaky move after Adam’s revelation. In that case, Billy might be the person getting Jack’s hard advice regarding his rage toward Adam and his need for help.

In the meantime, Y&R fans can expect Christine Williams (Lauralee Bell) to consider the future. Michael Baldwin (Christian LeBlanc) assured Adam that he could convince Christine to step down sooner and force a special election. It looks like Michael’s plan will work since Christine will mull over what’s next and get some support from Paul Williams (Doug Davidson).

The Young and the Restless spoilers say Michael’s path to DA is clear, but what’s ahead for Christine? She’ll have to figure that out, so it’ll be interesting to see where Y&R takes her. No matter what the future holds, Paul will be behind Christine 100 percent.

Some hot drama’s ahead in Genoa City. We’ll give you updates as other Y&R details emerge. Stay tuned to the CBS soap and don’t forget to check CDL often for the latest Young and the Restless spoilers, updates and news.