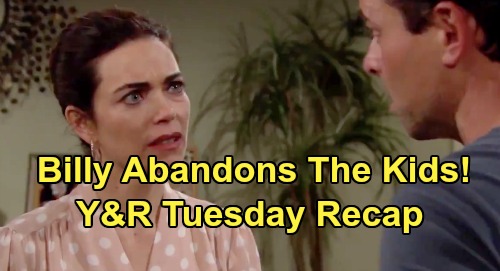 The Young and the Restless (Y&R) spoilers update and recap for Tuesday, July 30, tease that Billy Abbott (Jason Thompson) will get a bit frisky with Victoria Newman (Amelia Heinle). At home, Victoria will remind Billy that she’s got a conference call to take care of. She’ll also note that Billy hasn’t been sleeping much and wonder if he’s all right.

Soon after, Christian Newman will interrupt. Since Christian will be missing his dad, Billy will suggest he can spend some time with the boy instead. Once Victoria leaves for Newman Enterprises and Christian settles down, Billy will take some of Victoria’s old sleeping pills. He’ll awaken startled on the floor of the Chancellor mansion and read “Stop Adam” behind the peeling wallpaper.

At Nick Newman’s (Joshua Morrow) place, Daryl Tulane (Gordon Thomson) will explain how he intends to make Chelsea Newman (Melissa Claire Egan) rich. As Calvin Boudreau’s (John Burke) lawyer, Daryl will want Chelsea to sign some documents for a $5 million nest egg. He’ll note that there was also a trust for Connor Newman since Calvin wanted them to be taken care of.

Chelsea will think this feels wrong somehow, but Daryl won’t see the harm in accepting what Calvin left for her. Once Chelsea signs the papers, she’ll wonder what she should do next. Nick will worry that Chelsea might run away again, but she’ll promise not to leave and insist she wants this.

At Society, Abby Newman (Melissa Ordway) will console Lola Rosales (Sasha Calle) over her mama drama. She’ll think there’s still time for Celeste Rosales (Eva LaRue) to change her mind about coming back for the wedding. However, Lola will suggest she’s given up hope and has accepted that her mom won’t be there.

At Lola and Kyle Abbott’s (Michael Mealor) apartment, Kyle will call Celeste and leave her a message. He’ll do his best to convince Celeste to return for their nuptials. Once Lola arrives, she’ll find that Kyle’s set the mood for romance. They’ll get lovey-dovey before Lola points out she’s grateful for Kyle’s recent honesty and hopes that trend will continue. Kyle will seem a tad unnerved until they shift gears.

The Young and the Restless spoilers say Lola and Kyle will crack jokes about their looming wedding. Kyle will assure Lola that it’ll live up to her expectations. At Newman Enterprises, Nate Hastings (Sean Dominic) will explain the latest test results to Victor Newman (Eric Braeden) and Nikki Newman (Melody Thomas Scott). Since the new protocol is improving Victor’s condition, Nate will want to add another treatment element.

Victor will learn that the side effects could be worse, but he’ll think it’s important to move forward with Nate’s idea. Since Victor has a shot at beating this, they have to do whatever they can. Later, Victoria will hear the latest treatment news. Nikki will brush off any worries before they switch to the topic of Christian. She’ll offer grandparent time to make sure Billy and Victoria don’t get too overwhelmed.

Once Adam Newman’s (Mark Grossman) name comes up, Victoria will reflect on the video that tanked Nick’s chances of keeping custody. Despite her feelings on Nick’s J.T. Hellstrom (Thad Luckinbill) impersonation plot, Victoria will think Nick’s a far better person than Adam.

After Victoria returns home, she’ll be concerned to find out Billy left the children alone. Billy will be forced to come clean about his current issues. He’ll talk about his eerie Delia Abbott (Sophie Pollono) dreams and how he feels like he’s losing it. After Billy relays that he took a sleeping pill and wound up at the Chancellor mansion, Victoria will offer reassurance. She’ll think they can get Billy some help.

Back with Nate, Y&R spoilers say he’ll deliver excellent updates to Abby Newman (Melissa Ordway). With Victor’s approval, Nate will share that the test results were encouraging. Abby will express excitement before agreeing to have dinner at Nate’s house. They certainly have a good reason to celebrate!