The Young and the Restless Spoilers: Chelsea’s Alarming Special Delivery – Past Comes Back to Haunt Her, Nick Steps Up 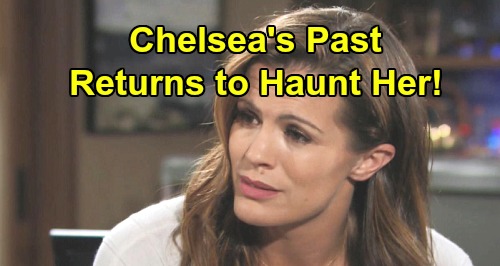 The Young and the Restless (Y&R) spoilers tease that more chaos is brewing for Chelsea Newman (Melissa Claire Egan). During the week of July 29-August 2, a special delivery will arrive. Chelsea will be taken aback by this unexpected little gift, which will actually mean big trouble!

There’s no confirmation on what this special delivery will involve, but we’d say it’ll have something to do with someone from Chelsea’s past. Gordon Thomson is set to debut as Daryl Tulane on Monday, July 29.

He’ll be around for several episodes, so the timing lines up with the delivery drama. Perhaps Daryl will send Chelsea some mild harbinger of doom right before he appears in town.

There’s also a chance Chelsea will get something from Adam Newman (Mark Grossman), but Y&R seems to be inching him in Sharon Newman’s (Sharon Case) direction for now.

Besides, Adam or anyone else in town could just drop it off in person. This special delivery idea makes it sound like someone sent it from further away – like Baton Rouge, where Daryl’s from.

That’s where Chelsea made her home with Calvin Boudreau (John Burke) before his untimely passing. Anita Lawson (Catherine Bach) also has a connection to Daryl, so she might be another option as this special delivery sender. She could warn Chelsea that Daryl’s headed to GC and leave her daughter fearful of what’s to come.

Will Nick Newman Play Protector When It Comes To Daryl Tulane?

What will Daryl try to pull? Will Nick Newman (Joshua Morrow) take a stand against Daryl and grow closer to Chelsea in the process? That seems likely now that Nick’s lost custody of Christian Newman temporarily. He’ll be getting lots of support from Chelsea, so he’ll want to return the favor.

Of course, Nick’s always in protective mode with Chelsea anyway. He’ll do whatever he can to make Daryl doesn’t make too many waves! The Young and the Restless spoilers say some great scenes are coming up. We’ll give you updates as other Y&R news emerges. Stay tuned to the CBS soap and don’t forget to check CDL often for the latest Young and the Restless spoilers, updates and news.