The Young and the Restless Spoilers: Cane’s Deception Sparks War with Grieving Devon – Guilty Lily at Center of Family Conflict

BY Marcy Cohen on July 22, 2018 | Comments: one comment
Related : Soap Opera, Spoiler, Television, The Young and the Restless 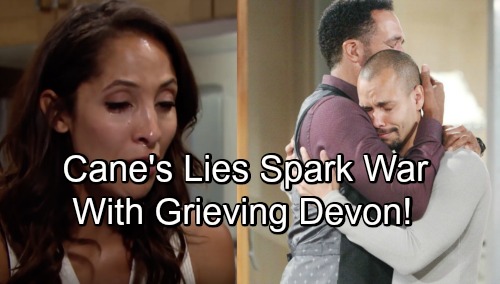 The Young and the Restless (Y&R) spoilers tease that Devon (Bryton James) has some tough tasks ahead of him. After he gets updates on Hilary’s incurable condition, Devon will realize he’s facing a brutal goodbye. He’ll want to make his last moments with Hilary special, so he’ll plan a touching hospital wedding. Devon will assure Hilary that he wants to make her his bride again immediately.

It looks like Hilary will eventually learn the truth about her fate. Nate (Brooks Darnell) may admit there isn’t much hope, so these final moments will be difficult for her as well. Hilary will just try to enjoy remarrying Devon and let herself be at peace. There really isn’t anything else she can do at this point.

Once the nuptials are over, it seems Hilary will quickly pass away and leave Devon to cope with the aftermath. The Young and the Restless spoilers say Devon’s family will try to be there for him, but he may cut himself off from them. There’s plenty of blame to go around in this accident, so Devon may just want to be alone. It’s clear that this was all a terrible chain reaction.

Of course, none of them could’ve predicted this nightmare. If they’d known Hilary was going to die after a crash, they certainly wouldn’t have behaved the same way. Nevertheless, what’s done is done and someone needs to pay. At the very least, Lily needs to know she ran the red light. She owes Devon a huge apology, but Cane (Daniel Goddard) wants Charlie (Noah Alexander Gerry) to keep this a secret.

That’s sure to spark some serious trouble. The Young and the Restless spoilers say Cane (Daniel Goddard) will struggle to guard the Chancellor legacy soon. Since Jack (Peter Bergman) confirmed he isn’t a Chancellor, perhaps Devon will become the enemy that tries to take Cane down. Devon has loads of money to fuel his efforts.

Charlie should also face Devon’s fury for his deception. Shauna and even Nate (Brooks Darnell) could be in the path of Devon’s rage. When this is all over, Devon may blame Nate for not doing enough to save his love. Hilary’s death will definitely tear Devon apart. Y&R viewers will see a very different side of him in the weeks ahead, so get ready for major Devon drama!