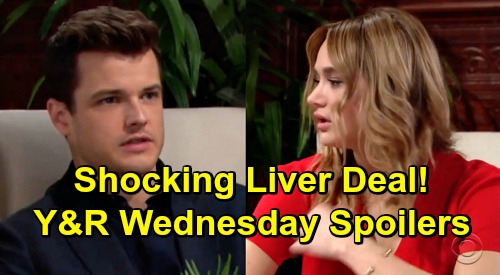 The Young and the Restless (Y&R) spoilers for Wednesday, March 6, tease that Christine Williams (Lauralee Bell) will get a pleasant surprise. The trial’s already been going her way, but Michael Baldwin’s (Christian LeBlanc) terrible strategy will lead to another crucial victory in the courtroom. Michael has decided to use his secret weapon, but it turns out that weapon will sink his own defense.

Y&R fans can expect Tessa Porter (Cait Fairbanks) to take the stand, so she’ll have to make a tough call. Mariah Copeland (Camryn Grimes) already testified that the video was sent to her through an anonymous email. Michael suggested he could subpoena her email accounts to verify that or she could just tell him the truth. Mariah took a risk and stood by the story, but how long can Tessa keep it up?

Michael may have proof that Tessa was the only one working late at Dark Horse that night. There might be evidence that shows Tessa had to be the person who found the video. Since Tessa is Mariah’s girlfriend, the jury won’t have a hard time buying that the anonymous tip tale is bogus. It should become evident that Mariah lied to cover Tessa’s tracks.

Of course, Tessa could help Mariah avoid a perjury charge by claiming she’s the one who sent the video anonymously. She might contend that she thought Mariah would give the women a heads-up, but it didn’t turn out that way. Michael won’t push too hard on Mariah’s part in all this. He’ll be more interested in how Tessa blackmailed Nikki Newman (Melody Thomas Scott) and the others for $250,000.

Michael feels like this will make Nikki and Victoria Newman (Amelia Heinle) look like vulnerable ladies who were victimized even further. However, the story is pretty incriminating. Nikki sent Tessa a measly buck until Tessa provided a picture of the burial site. That was enough to secure a quarter of a million dollars, so that sure seems like an admission of guilt.

You can bet Christine will frame it that way, no matter what Michael tries to spin. There’s a chance the kidnapping drama could even come out, which would make Victoria and Nikki look guilty once again. Regardless, Christine will pull off a serious win thanks to Michael’s bungled effort. Later this week, Tessa will be taken into custody while Michael starts working on another dicey defense strategy.

In the meantime, Summer Newman (Hunter King) will feel like everything’s coming together for her. In Tuesday’s Young and the Restless episode, Kyle Abbott (Michael Mealor) makes a desperate promise. He offers to dump Lola Rosales (Sasha Calla) and wed Summer if he must. Kyle will do anything Summer asks if she’ll just donate part of her liver, which is a match for Lola.

On Wednesday’s new Y&R episode, March 6, Summer may make Kyle sweeten the pot even more. The Young and the Restless spoilers say they’ll nail down the terms of their deal, but Summer may end up regretting this. We’ll give you updates as other Y&R news comes in. Stay tuned to the CBS soap and don’t forget to check CDL often for the latest Young and the Restless spoilers, updates, and news.