The Young and the Restless Spoilers: Victor Fights to Save Summer After Liver Transplant – Hunter King Temporary Exit Strategy?

BY Kinsley Goldman on March 3, 2019 | Comments: one comment
Related : Soap Opera, Spoiler, Television, The Young and the Restless 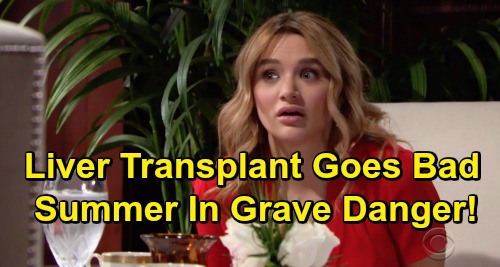 The Young and the Restless (Y&R) spoilers tease that Victor Newman (Eric Braeden) may soon have another family crisis to deal with. He’s already worried about Victoria Newman (Amelia Heinle) and Nikki Newman (Melody Thomas Scott). They’re currently caught up in a murder trial that could land them behind bars.

However, the next crisis could involve his granddaughter’s failing health. Lola Rosales (Sasha Calle) is running out of donor match options, so it looks like Summer Newman (Hunter King) may be just the person she needs. It makes sense to have Summer save Lola’s love for drama’s sake.

Unfortunately, the transplant surgery could come with some snags. Summer could soon be the one who’s comatose and causing total panic. Victor certainly doesn’t care much for Arturo Rosales (Jason Canela) or Rey Rosales (Jordi Vilasuso). It’s doubtful he’d care much for Lola either, especially since she’s standing in the way of what Summer wants.

Of course, Victor probably wouldn’t be thrilled about a Summer and Kyle Abbott (Michael Mealor) reunion anyway, but he still doesn’t like people who present problems for the Newmans. The whole Rosales family has become a real pain for Victor and his loved ones. If this liver transplant for Lola puts Summer’s life on the line, Victor should like the Rosales bunch even less.

The Young and the Restless spoilers say Summer’s health would be the priority though. Victor would undoubtedly make sure his granddaughter got the very best care. Summer might even need to enter some fancy treatment center far away from Genoa City. There might be some drug trial that could save her.

Victor once helped Summer’s mom, Phyllis Summers (Gina Tognoni), come out of her lengthy coma. Summer’s situation might require a different drug and more time, but you can bet Victor would pursue all possible routes to recovery.

We know Hunter King has a role as a series regular on CBS’ Life in Pieces. The new season is dropping on April 18, so King’s schedule could get tricky if filming’s still underway.

Will Y&R have to write Summer out for a while? Is so, letting her stay comatose would be the ideal exit. Summer could just be out cold until Victor’s specialists worked a miracle. Either that or Kyle’s growing love could bring Summer back from the brink of death!