BY hellodrdavis on October 1, 2019 | Comments: 2 comments
Related : Soap Opera, Spoiler, Television, The Young and the Restless 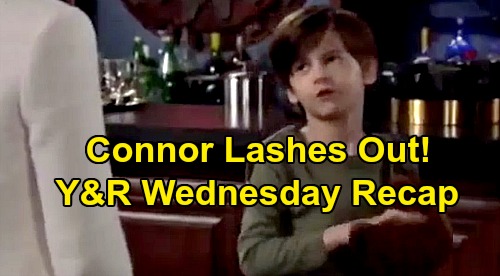 The Young and the Restless spoilers recap for Wednesday, October 2, tease that Billy Abbott (Jason Thompson) will return to Jabot and fill Jack Abbott (Peter Bergman) in on his recent ordeal. Jack will get all the details about how Billy tried to kill Adam Newman (Mark Grossman), and Jack will be glad that Billy’s in therapy and things are getting resolved. Meanwhile, Summer Newman (Hunter King) will continue to get support from Kyle Abbott (Michael Mealor) about her recent ordeal with Victor Newman’s (Eric Braeden) “death” and the betrayal she feels.

Jack will then announce to Billy and Kyle that he’ll be stepping back at Jabot and will no longer be involved in the day-to-day running of the company. He’ll focus now on writing the Abbott family story with Traci Abbott (Beth Maitland). Jack will say that he wants Kyle and Billy to run the company together, and they’ll agree to handle it, although there will be some question about who gets the CEO office.

Meanwhile, Victor will be concerned about the effect of his ruse on his family – particularly Summer – and his company. Nikki Newman (Melody Thomas Scott) will offer her support and encourage him to let Victoria Newman (Amelia Heinle) handle things at work so he can deal with his health. Paul Williams (Doug Davidson) will later pay Victor a visit, and he’ll still be annoyed that Victor just let Adam walk away.

Victor will express his concern to Nikki about the tension between the people who were in on the ruse and those who weren’t. Nikki will take charge and suggest that a family get-together would be in order – it’s time to unite the family and make everyone stronger. Victor will love the idea, and he and Nikki will declare their love for each other.

Next, Rey Rosales (Jordi Vilasuso) will gripe at Paul about Paul’s involvement in Victor’s death ruse. Rey won’t think it’s right that he’s not allowed to go rogue, but Paul gets to fool everyone with a big scam. Later, Rey will chat with Sharon Newman (Sharon Case) at Crimson Lights, and he’ll be glad to note that Sharon is no longer trying to defend Adam – seems like poisoning The Moustache has cost Adam his last supporter. Mariah Copeland (Camryn Grimes will do her best to get Sharon to spend time with Rey, but the two won’t really connect.

Finally, Nick Newman (Joshua Morrow) will face some serious backlash from the people he kept in the dark about Victor. Both Sharon and Chelsea Lawson (Melissa Claire Egan) will be irritated with him. Sharon will tell him that he screwed up by lying to Faith Newman (Alyvia Alyn Lind), and Chelsea will be upset since she now has to tell Connor Newman (Judah Mackey) that his grandfather is really alive. Nick will offer to help, but Chelsea will reject his offer.

When Chelsea tells Connor that Victor is alive, Connor will get upset. He’ll want to tell Adam about Victor, forcing Chelsea to tell him that his father knew Victor was alive but left town anyway. That will really upset Connor, who will accuse his mother of lying. Summer will wind up talking to Connor, and they’ll bond over being lied to.

Nick will then try to apologize to Summer, but she won’t be too receptive to his apology. She’ll feel like Nick treated her like a child and an outsider, and she’ll say that she’s not sure that anything can fix this situation. She’ll end up leaving in a huff, and Chelsea will openly wonder what Nick expected. Nick will reach out to Chelsea, but she’ll need more time to think about everything that’s gone down.