BY Heather Hughes on October 22, 2019 | Comments: one comment
Related : Soap Opera, Spoiler, Television, The Young and the Restless 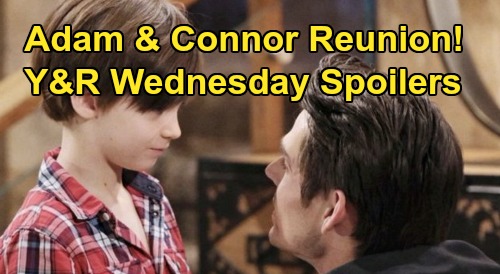 The Young and the Restless (Y&R) spoilers for Wednesday, October 23, tease that Sharon Newman (Sharon Case) and Rey Rosales (Jordi Vilasuso) will kick off their new chapter. Y&R fans know Adam Newman (Mark Grossman) issues drove “Shey” apart, but they’ve learned from their blunders. They’ve both grown from the experience, so they’re inching their way back to each other.

Of course, Rey and Sharon won’t want to go too fast here. They’ll take this one step at a time, but they’ll indeed move forward on Wednesday. Rey’s been talking about a second date, so he may come up with something that’s fun and lowkey. As long as Rey’s with Sharon, he should be a happy camper.

Likewise, Sharon will be pleased over this second chance with Rey. They’ll start their new beginning off right, so stay tuned to watch them reconnect. Elsewhere, Chelsea Newman (Melissa Claire Egan) and Nick Newman (Joshua Morrow) will face a difficult choice. There’s no word yet on what that means exactly, but it’ll undoubtedly be a dilemma related to Connor Newman (Judah Mackey).

On Tuesday, Nick tracks Adam down and pushes his brother to come home. Chelsea also calls with the news that Connor broke his arm and is in the hospital. Despite his initial refusal, The Young and the Restless spoilers say Adam will indeed head back to Genoa City soon. Wednesday’s episode may set the stage for Adam’s reunion with Connor. That might be how Chelsea and Nick’s decision fits in.

Connor’s missing his dad, but he also feels abandoned. There could be some issues as they reconnect. Chelsea and Nick know Connor’s already been through a lot, so they’ll just want to make things as easy as possible. Adam will obviously want that as well. At least there’s one thing they can all agree on!

Finally, The Young and the Restless spoilers say Phyllis Summers (Michelle Stafford) will put her plot in motion. She mentioned scheming against Abby Newman (Melissa Ordway), so perhaps Abby will be Wednesday’s victim. Phyllis has been pushing hard for security upgrades at the Grand Phoenix. She feels Abby will be too distracted by her “miserable life” to notice what’s really happening.

Whatever Phyllis has in store can’t be good! Abby should face a curveball before long, so don’t Phyllis’ sneaky move and the drama that’ll follow. We’ll give you updates as other Y&R details emerge. Stick with the CBS soap and don’t forget to check CDL often for the latest Young and the Restless spoilers, updates and news.