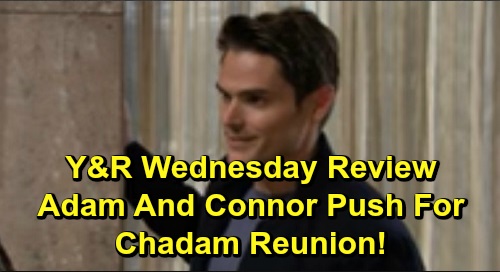 The Young and the Restless spoilers review for Wednesday, October 30, tease that the Halloween festivities will begin across Genoa City. Chelsea Lawson (Melissa Claire Egan) will plan to spend the evening with Nick Newman (Joshua Morrow), Christian Newman (Alex Wilson), and Connor Newman (Judah Mackey) at the Crimson Lights party. But instead of bringing Connor, Adam Newman (Mark Grossman) will call Chelsea and say there’s a problem.

As it turns out, Connor won’t want to go to the Halloween party, as he’ll think Adam is trying to get rid of him. Much to Nick’s disappointment, Chelsea will go to Adam’s penthouse to try to get him to put on his costume and come to the party. But when she gets there, Connor will refuse to go – he’ll say he’s not a little kid anymore, and he’ll want to hang out with his dad and watch a movie. Together, they’ll cajole Chelsea to make her special popcorn recipe for them.

Then, Connor will ask Chelsea to stay and watch the movie with them, which she’ll do after texting Nick about her plans. They’ll enjoy the movie together, and it will be like old times. Connor will fall asleep nudged up next to Chelsea, and as Adam carries him off to bed, Connor will say that he likes it this way – with the three of them together. After Adam comes back downstairs, he’ll notice that Chelsea is asleep on the couch, and that Nick is trying to call on her phone. Adam will put a blanket over Chelsea.

It looks like Chelsea may be down for the night, which won’t make Nick happy at all. He’s really worried that the whole situation with Adam keeping Connor will and up not being as temporary as Chelsea thinks it will be. Sure, Chelsea has legal custody of Connor, but now that Connor is ensconced in Adam’s home, it’s going to be pretty difficult to get him out of there, no matter what the law says. Chelsea could be in for quite a fight, not only from Adam but from Connor himself.

Meanwhile, Kyle Abbott (Michael Mealor) will be in a funk about Theo Vanderway (Tyler Johnson) possibly being his cousin. He’ll bark at Lola Abbott (Sasha Calle) about how Theo is a parasite who’s going to latch onto his family, and he’ll get really testy when she tries to defend Theo. Later, Kyle will head to visit Jack Abbott (Peter Bergman), where he’ll get into it with him, too.

Jack will tell Kyle that he’s reaching out to Theo tonight, and Kyle will explode. He’ll tell his dad adamantly that Theo isn’t someone that they want as a member of the family, to which Jack will reply that Theo may already be family. Kyle will argue that Dina Mergeron (Marla Adams) didn’t want this secret to come out, so they should respect that, but Jack will argue that all of the people she was protecting are now gone. Kyle will beg Jack not to do this.

And at that moment, Theo will arrive at the estate, and Kyle will bolt. Jack will tell Theo the whole story, and Theo will be stunned that Jack could be his uncle and that Kyle might be his cousin. Jack will want Theo to take a DNA test, and Theo will agree. He and Jack will get along well, and Theo will say that he thinks he understands why Dina gave her baby away – after all, times were different then, and she didn’t want to be shamed and excluded.

Theo will also realize that Kyle isn’t happy about the situation, and later he’ll find Kyle moping at Crimson Lights. Theo will call Kyle “cuz” and sit down with him. Kyle won’t be amused when Theo says that he thinks they probably hit it off in the first place because they share DNA. Kyle will coldly say that he’s done putting up with Theo’s crap, and that it doesn’t matter who his grandmother is.

Theo will look pretty hurt by all of this, and he’ll realize that Kyle wasn’t really trying to be friends with him the other night; he was just fishing for information about his father. Kyle will end up walking out on Theo, who will look confused and sad about the whole thing. Of course, Kyle is in shock right now, so his feelings might soften a little over time. But Kyle really needs an attitude adjustment, because it looks like he’s going to have to deal with Theo for a long time.