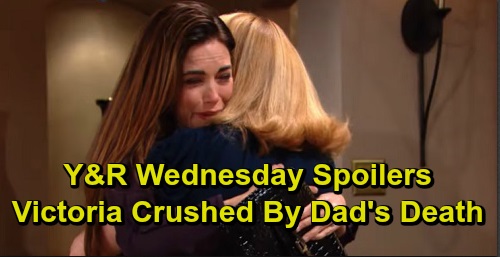 The Young and the Restless (Y&R) spoilers for Wednesday, September 18, tease that the news of Victor Newman’s (Eric Braeden) demise will spread rapidly. Of course, we know Victor isn’t really dead and gone. He’s obviously just scheming to catch Adam Newman (Mark Grossman), but it’ll take some work to pull this off. Only a few people seem to be in on the plot at this point.

Nate Hastings (Sean Dominic) has to be part of the charade as Victor’s doctor. Nikki Newman (Melody Thomas Scott) and Nick Newman (Joshua Morrow) must be in the loop as well. It’s clear that they’re just going through the motions of mourning.

Abby Newman (Melissa Ordway) is up for debate. Ordway was the best of the bunch when it came to keeping things mysterious. In some ways, Abby’s emotions felt genuine. However, there were other moments where Abby seemed to be holding back. The jury’s still out on Abby, but we can definitely assume Summer Newman (Hunter King) is in the dark. She was a full-blown mess over her grandpa’s “death.”

Unfortunately, Victoria Newman (Amelia Heinle) wasn’t around to get a heads-up on the grand plan. On Wednesday, she’ll be crushed when she finds out Victor’s dead – possibly from the press. Will Nick or Nikki explain things to Victoria? They’d better fill her in at some point, especially if Abby turns out to be in on this.

It’s not fair to make Victoria grieve for no reason, especially when she’s rooting for Adam’s downfall like the others. As for Summer, it makes sense to exclude her. Summer could blab to her mom, Phyllis Summers (Michelle Stafford), who’s quite close to Adam these days. Phyllis could warn Adam about what they’re up to and blow everything, so Summer’s pain is necessary.

Nick will also have to decide how much to reveal to Chelsea Newman (Melissa Claire Egan). Y&R’s weekly promo shows Chelsea crying, but that could just be her initial reaction. It’s possible Nick will give her updates later. Then again, Nick could keep the plot a secret due to Chelsea’s co-parenting arrangement with Adam. It’ll be interesting to see how Nick handles this tricky situation.

Other Young and the Restless spoilers say Michael Baldwin (Christian LeBlanc) will play the blame game. When he learns Victor’s gone, it won’t take him long to hold Adam responsible. Michael will think this has Adam written all over it, so he may deliver a warning. The DA might tell Adam that sooner or later, he’s going to get caught.

Adam may remind Michael that he’s got leverage, but that can only help him avoid legal consequences. It can’t help him avoid what the Newmans have in store – and Michael may guess it’ll be brutal! The Young and the Restless spoilers say there’s much more drama to come. We’ll keep you posted as other Y&R details emerge. Stay tuned to the CBS soap and don’t forget to check CDL often for the latest Young and the Restless spoilers, updates and news.