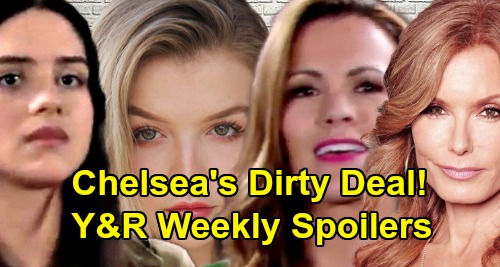 The Young and the Restless (Y&R) spoilers for the week of August 19-23 tease that some shockers are on the way. First, let’s talk about Lola Rosales (Sasha Calle) and Kyle Abbott’s (Michael Mealor) wedding. After their vows are completed, the real drama will begin! It seems Theo Vanderway (Tyler Johnson) will crash the reception with Zoe Hardisty (Anna Grace Barlow).

Of course, Zoe happens to be the girl who was underage and got drunk at Kyle’s party with Theo. Kyle gave Zoe’s dad $100,000 to keep quiet. Theo will be sending a powerful message by showing up with Zoe on his arm, but he’ll claim he doesn’t want any trouble. After Kyle and Theo’s showdown, Theo will agree to leave with Zoe.

However, Phyllis Summers (Michelle Stafford) will have a few questions before Zoe takes off. She’ll corner Zoe and try to get to the bottom of exactly who she is. Since Summer Newman (Hunter King) could get wrapped up in all this, a fierce Phyllis will expect some answers. She doesn’t mess around when it comes to her daughter.

On a lighter note, the reception will also feature some nice tunes. According to Y&R Composer and Music Supervisor RC Cates, some musicians who were part of the original Frank Sinatra band were part of the recording session. That’s just a tidbit to keep in mind as you listen to what’s going on in the background.

Over with Mariah Copeland (Camryn Grimes) and Tessa Porter (Cait Fairbanks), they’ll get their own moment to shine. Mariah will make it clear Tessa’s her one and only at some point during the wedding festivities. There’ll be some opportunity for Mariah to indicate this will be a lasting love. That would ordinarily be ominous on a soap, but not so much with “Teriah” since this is a common theme for them.

Tessa already declared what they have is forever months ago and nothing troubling whatsoever has happened. Although Cait Fairbanks was dropped to recurring, she’s still been filming regularly. There are some particularly fun and quirky “Teriah” scenes coming up next month, so keep watching for those.

In the meantime, let’s talk about a different duo. The Young and the Restless spoilers say Lauren Baldwin (Tracey E. Bregman) will be fed up with Michael Baldwin (Christian LeBlanc). She’ll be tired of all the secrecy, so she’ll insist he needs to come clean. Michael’s drowning in Adam Newman (Mark Grossman) issues thanks to Kevin Fisher (Greg Rikaart), but we’ll see how much he tells Lauren!

Speaking of Kevin, he may have big problems soon. Someone will make a startling comeback in the week ahead, so Chloe Mitchell (Elizabeth Hendrickson) is certainly an option. Elsewhere, Chelsea Newman (Melissa Claire Egan) will make a deal. Since she’s got dirty money to launder and Phyllis needs quick cash for a hotel stake, they may be poised to become unlikely allies.

Other Y&R spoilers say Adam will focus on a new plan. Could that plan involve his marriage proposal to Sharon Newman (Sharon Case)? It appears so based on some new info. Finally, Victor Newman (Eric Braeden) will watch out for Abby Newman (Melissa Ordway). He may warn Nate Hastings (Sean Dominic) not to break her heart or perhaps deliver a threat or two to Phyllis.