BY hellodrdavis on July 21, 2019 | Comments: 2 comments
Related : Soap Opera, Spoiler, Television, The Young and the Restless 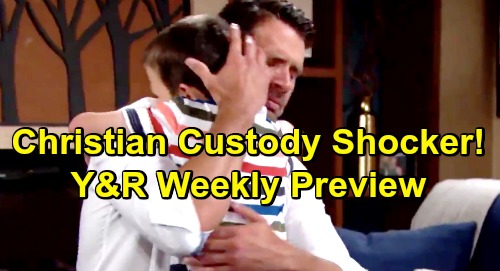 The Young and the Restless spoilers tease that we’re in for a big week full of dark thoughts, deep fears, and serious conflict. The new Y&R weekly promo video launches with Billy Abbott (Jason Thompson) in clear crisis, as he continues to have nightmares about his daughter Delia Abbott’s (Sophie Pollono) death at the hands of Adam Newman (Mark Grossman).

Billy is shown being haunted by the sound of Delia’s voice, as well as by a shocking discovery that he’ll make along with Kevin Fisher (Greg Rikaart) this week. He and Kevin will peel away some wallpaper at the Chancellor Estate to reveal that word “ADAM” written in bold black lettering.

It was just recently that Billy found the word “DADDY” carved into a side table, so he’ll realize that something’s up. Someone is Gaslighting Billy!

Look for Billy to struggle this week with his feelings of hatred and revenge for Adam. He’s shown in the weekly promo telling someone that he got a gun and has fantasized about getting rid of Adam. It looks like he’s talking to Sharon Newman (Sharon Case), so perhaps she’ll be able to talk him out of taking criminal action against Adam.

Meanwhile, Nikki Newman (Melody Thomas Scott) and Victor Newman (Eric Braeden) will enjoy some quality time together, but they’ll inevitably end up discussing the stress that Victor’s disease has introduced into their lives. Nikki will express her concerns after Victor reveals that he’s considering stopping his experimental treatments for the time being.

Of course, Victor doesn’t like the feelings of helplessness that the treatments have brought on, since they’re causing mental confusion and other cognitive deficits. Nikki will predictably encourage him to keep fighting the illness, as she’s just not ready to face life without him. We’ll see what Victor decides.

Next, Lauren Baldwin (Tracey E. Bregman) is shown pressing Kevin for details about what he’s hiding. Lauren will figure out pretty quickly that Kevin has something to do with Michael Baldwin’s (Christian LeBlanc) sudden decision to recuse himself from representing Nick Newman (Joshua Morrow) in his custody case against Adam. And it doesn’t look like Lauren’s going to stop until she gets to the bottom of what’s going on!

Speaking of Nick, he’ll face a terrible week as the custody case kicks off. Adam will pull a despicable stunt during the hearing, during which the video of Nick pulling off the JT Hellstrom (Thad Luckinbill) mask and revealing himself to Victor will be shown to the judge. According to Y&R spoilers, Adam will make a big deal about Nick “terrorizing” Victor by impersonating JT, and it looks like Nick will lose his cool.

Later in the promo, Nick is shown hugging Christian Newman (Jamie and Alister Tobias) and sitting by himself at home crying, so it looks like Adam will definitely get the best of him in court. These cases tend to move along quickly on Y&R, so we could see a ruling in the case by week’s end, which means that Nick could be in very real danger of losing Christian.

Finally, we’ll see some conflict between Kyle Abbott (Michael Mealor) and Theo Vanderway (Tyler Johnson) this week. Kyle is shown in the promo ominously telling Theo that “you’ll pay” before giving him a big shove, right there in the middle of Crimson Lights. No doubt this is some fallout over Theo giving Lola Rosales (Sasha Calle) information about Kyle’s partying past back when he was in New York.

Kyle sure is getting awfully upset about Lola knowing about his actions as a party boy. Could there be something really bad in his past that he wants to keep from Lola? We know there were lots of blondes in his past, but could there be something seriously disturbing that Kyle did, or perhaps an association he had that he doesn’t want Lola to ever find out about? Viewers will have to tune in this week to see.

It certainly looks like we’re in for an exciting week! Stay tuned to the CBS soap and don’t forget to check CDL often for the latest Young and the Restless spoilers, updates, and news.