BY Annemarie LeBlanc on June 2, 2019 | Comments: one comment
Related : Soap Opera, Spoiler, Television, The Young and the Restless 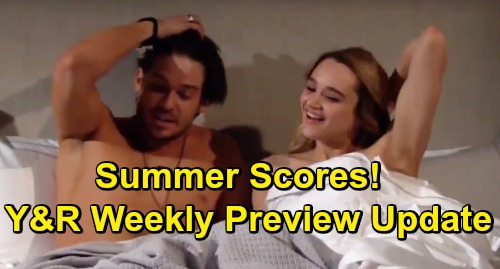 The Young and the Restless spoilers tease that we’re in for a week of relationship and family drama during the week of June 3-7. The new Y&R weekly preview promo video promises that some key Genoa City couples will be trying to define themselves while the Newman family implodes from within.

First off, Kyle Abbott (Michael Mealor) will decide that it’s time to move his relationship with Lola Rosales (Sasha Calle) along. He’s barely split from Summer Newman (Hunter King), but he’ll decide that he’s ready to tie the knot with Lola! The promo shows him floating the idea of marriage in the kitchen at Society, with Lola balking that she’s “just not ready for this.”

Kyle will be dismayed, but knowing him, he won’t give up on the idea of marriage. He just might come up with a more creative way of asking! Meanwhile, Summer will decide that she’s ready for a hot summer fling. She’s been spending time with the hunky Theo Vanderway (Tyler Johnson), and in the promo she proclaims, “no strings, just fun!” as she and Theo are shown in bed together.

The new Y&R promo also addresses the mounting tension going on among the Newman men. Nick Newman (Joshua Morrow) is shown appealing to Victor Newman (Eric Braeden) to get Adam Newman (Mark Grossman) to stand down. Of course, Nick is outraged that Adam is back and wanting to take possession of his son, who Nick has raised.

But it doesn’t look like Victor will be willing to get in the middle of the dispute between the brothers. “A father doesn’t take sides,” he declares in the promo, which will be Victor’s position of the moment. It looks like that will leave Nick to battle with Adam on his own.

And speaking of the Nick/Adam war, it looks like things are going to get heated between the brothers this week. The promo shows Adam threatening Nick and telling him that “I own you” and “I want my son.” But don’t look for Nick to back down in this fight, as this week’s Y&R spoilers indicate that he’ll plot his strategy.

It looks like we’re in for an exciting week! Stay tuned to the CBS soap and don’t forget to check CDL often for the latest Young and the Restless spoilers, updates, and news.