The Young and the Restless Spoilers: Kyle and Lola Engagement Nightmare – Summer and Celeste Work To Split Kola

BY Sean O'Brien on June 2, 2019 | Comments: one comment
Related : Soap Opera, Spoiler, Television, The Young and the Restless 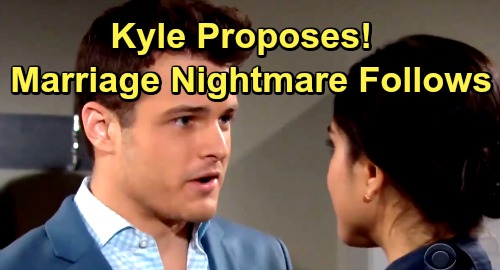 The Young and the Restless spoilers tease that Kyle Abbott’s (Michael Mealor) marriage proposal will be accepted by Lola Rosales (Sasha Calle) eventually. Whether that means Kola’s engagement realizes marriage, or splits isn’t yet predictable. However, a look at the recent past offers clear indications of where this couple will go.

Hardcore fans recall Lola’s overreaction to the pricey purse Kyle purchased for her. She took that as a slight to her station in life, with her boyfriend being very well-heeled.

Kyle learned from that event, tailoring his approach with much greater caution. He also, most importantly, made the right move by ejecting himself from his faux marriage to Summer Abbott (Hunter King).

Of course any telegraphs that see certain Kola nuptials rely on a finalized Skyle divorce. Summer isn’t pleased that Kyle dumped her, despite her recent involvement with a social media influencer agent. Yes that digital job title is a mouthful by the way. Popularity, in a new form, with a fresh nickname, basically.

Eva LaRue’s (Celeste Rosales) coming Y&R debut will create a maternal resource for Lola, where a lack of one existed to-date. With Celeste’s personality yet to be defined, it’s hard to project whether she’ll want her daughter to proceed cautiously, or secure the Abbott gold as soon as humanly possible.

Assume that Celeste believes in her daughter’s best interests. That would slow Kola’s engagement length to potentially at least later this summer, or into the fall. However, if Celeste sees Kyle as Lola’s ticket to the good life, then a Kola wedding might be organized by the mother of the bride within weeks of her arrival in Genoa City.

If the wedding is planned too far ahead, then it’s likelihood dims somewhat, or maybe altogether. The strains of intended marriage, among other things (hello Mia Rosales, Noemi Gonzalez) stopped Lola’s brother, Arturo Rosales (Jason Canela), and Abby Newman (Melissa Ordway) from tying the knot. Here’s hoping that isn’t the final result for Kola.

With whatever developments and whoever applies their opinions onto Lola and Kyle’s lives, one plot point is clear. This endearing couple loves each other. That alone gives these kids a shot at blocking out the noise and affirming their new life together.

Who knows, maybe they’ll elope. A nice place to have a returning celebration would be Society. That new hot spot is known to have a great chef. She’d probably be okay with Abby offering an employee discount as well.