BY Heather Hughes on June 2, 2019 | Comments: one comment
Related : Soap Opera, Spoiler, Television, The Young and the Restless 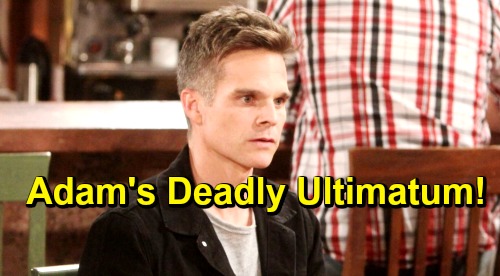 The Young and the Restless (Y&R) spoilers tease that Kevin Fisher (Greg Rikaart) will find himself in a tight spot. Y&R fans know Adam Newman (Mark Grossman) recently got confirmation that Chloe Mitchell (Elizabeth Hendrickson) is alive. His minion believes he knows Chloe’s location, so that’ll probably be what brings Kevin back to Genoa City.

Kevin will show up again on June 7, but will he jump into drama right away or reach out to some loved ones first? Either way, trouble’s brewing during the week of June 10-14. The Young and the Restless spoilers say a huge gamble is headed Kevin’s way. He’ll make a risky deal with someone, so there’s an interesting scenario to consider here.

Chloe is living a secret life as Helen Jones with Kevin and their daughter Bella Fisher (Cali May Kinder). They were in Oregon the last we heard. If Adam’s helper found Chloe, it’s reasonable to assume he found Kevin, too. Adam is fighting hard to get his family back, so he may not want to destroy Kevin’s. However, he could certainly exploit Kevin’s desire to keep his together.

Will Adam blackmail Kevin into helping him with a project? Y&R spoilers state that Phyllis Summers (Gina Tognoni) will form an alliance with Adam, but she’ll be kidnapped soon after. If Adam isn’t behind that, he’ll be out an ally. Adam might decide he can use Kevin’s skills to his advantage – perhaps to burn Victor Newman (Eric Braeden) or Nick Newman (Joshua Morrow) in some way.

The Young and the Restless spoilers say Adam doesn’t want vengeance, but he does want to take his family members down a few pegs. No one is being as cooperative as Adam would like, so he’ll make some moves that could change that. Adam could plenty of chaos in the process, but he might need Kevin’s help to pull it off.

Will Adam give Kevin an ultimatum? He might suggest that he’ll leave Kevin and Chloe alone to raise their daughter if Kevin will do whatever he asks. If Kevin says no, his family could be torn apart. Adam could turn Chloe in for attempted murder and ruin their lives. If Kevin says yes, he’ll risky provoking the wrath of “The Moustache.”

Of course, it’s possible Kevin will make this risky deal with someone else, but it would make sense for Adam to be the one pulling him to the dark side. That’s exactly where Young and the Restless spoilers say Kevin will end up during his latest stint!

Are you looking forward to Kevin’s comeback? Do you think Adam will rope Kevin into something dangerous? We’ll give you updates as other Y&R news comes in. Stay tuned to the CBS soap and don’t forget to check CDL often for the latest Young and the Restless spoilers, updates, and news.