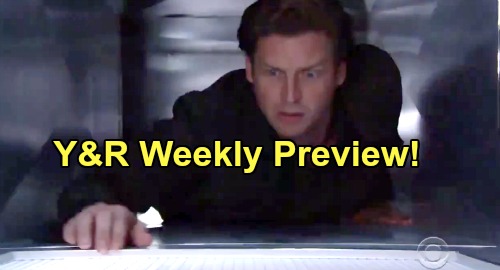 The Young and the Restless (Y&R) spoilers preview for the week of November 11-15 tease that some hot drama’s coming up in Genoa City. First, let’s talk about Theo Vanderway (Tyler Johnson) and an amazing job offer. He’ll have a nice chat with Ashley Abbott (Eileen Davidson) this week, but it’ll come after plenty of chaos within the family. There’ll be some major Abbott upheaval going on, and Theo will be at the center of it all.

However, Ashley’s the kind of gal who likes to make decisions for herself. Despite Kyle Abbott’s (Michael Mealor) reservations about his cousin, Ash will want to meet Theo and see what he’s really like. She’ll open up to Theo about her own background as a non-blood Abbott and guess he’s feeling the same way now. Theo isn’t a true Abbott either, so his new connection to them has to feel strange.

Ashley will know Jack Abbott’s (Peter Bergman) given Theo a warm welcome into the fam, but she’ll assume he’s still feeling like an outsider. Perhaps Ashley will suggest that never goes away entirely – at least it hasn’t for her. Nevertheless, Ashley seemingly came to grips with her non-blood status and finds comfort in forging her own path. She’ll think Theo could be part of that path if he comes to work for her in Paris.

While Theo mulls over Ashley’s tempting proposal, Jack and Nick Newman (Joshua Morrow) will get some troubling news. At Crimson Lights, Rey Rosales (Jordi Vilasuso) and Paul Williams (Doug Davidson) will fill them in on a hostage crisis. They’ll let Nick and Jack know what’s happening at the Grand Phoenix, so alarm bells will immediately sound for Nick.

An agitated Nick will mention Abby Newman (Melissa Ordway) and Chelsea Newman (Melissa Claire Egan), who’ll be caught up in the mayhem. Nick will want to get over there and pitch in, but Paul and Rey may advise against it. Hostage situations have to be handled delicately or they can end in disaster!

Of course, Simon Black (Jeffrey Vincent Parise) will be responsible for this mess. He’ll want everyone except Abby, Chelsea and Connor Newman (Judah Mackey) to get out, but The Young and the Restless spoilers say Adam Newman (Mark Grossman) will stand his ground. Adam will suggest Simon will have to shoot him before he leaves without his family.

Abby will ultimately break down in tears and insist that Simon has to let them go. She’ll worry none of them will make it out alive, but Phyllis Summers (Michelle Stafford) and Phillip “Chance” Chancellor IV (Donny Boaz) will leap into action. Thanks to Phyllis’ surveillance equipment and knowledge of the hotel, she can serve as a secret weapon.

Phyllis’ trap will be risky, but it’ll be worth it if they can save the hostages. Y&R’s weekly preview shows Chance crawling through the air duct and spying through the vent. One way or another, Simon will be neutralized before he can go on a violent rampage.

Still, there’ll be some suspenseful moments along the way! The Young and the Restless spoilers say Adam will nearly get himself shot, but it looks like he’ll avoid taking a bullet this time around. We’ll give you updates as other Y&R details emerge. Stay tuned to the CBS soap and don’t forget to check CDL often for the latest Young and the Restless spoilers, updates and news.