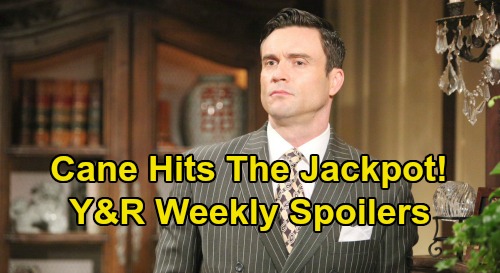 The Young and the Restless (Y&R) spoilers for the week of October 14-18 tease that we’ll see some curveballs and confrontations. First, let’s talk about Phyllis Summers (Michelle Stafford). She’ll be back in Genoa City to push some buttons. Phyllis will get into an argument with Sharon Newman (Sharon Case), but her feud with Abby Newman (Melissa Ordway) won’t die down either.

Y&R fans can also expect Phyllis to hide her trail, which could have something to do with her Vegas trip and search for Chance Chancellor answers. Meanwhile, Nate Hastings (Sean Dominic) will get on Abby’s bad side again. These two have already faced some drama over Victor Newman’s (Eric Braeden) fake death scheme, but the friction is only going to get worse.

Afterward, Nate will try to learn more about Amanda Sinclair (Mishael Morgan). The Young and the Restless spoilers say Nate will grill Amanda about her background, but he’ll probably take a softer approach this time. Nate may start out by playing Amanda, but this seems like Y&R’s way of inching them together as a couple.

Elsewhere, Nick will tackle a new challenge. There have been some hints about Nick potentially getting into politics. Nick shut down the idea, but maybe he’ll decide to start a campaign after all. However, Nick will reserve some time to focus on Chelsea Newman (Melissa Claire Egan) and Connor Newman (Judah Mackey). Chelsea will remain deeply troubled as Connor’s behavior gets worse.

Other Young and the Restless spoilers say Victor will put Billy Abbott (Jason Thompson) on the hot seat. He’ll grill “Billy Boy” and hope he can pry the truth out of him. It sounds like Victor will learn Billy was behind the incident out on route 7. If so, Victor will undoubtedly rip into Billy for trying to kill Adam Newman (Mark Grossman).

Across town, Devon Hamilton (Bryton James) will find an intriguing clue. A mystery will unravel that brings more questions, so Devon will struggle to put the pieces together. Speaking of mysteries, the Abbotts will face one as well. After Dina Mergeron (Marla Adams) falls are her memory care facility, Jack Abbott (Peter Bergman) will race over to see her. This visit will bring a hint for Jack and Traci Abbott’s (Beth Maitland) family history book.

Finally, The Young and the Restless spoilers say Cane Ashby (Daniel Goddard) will hit the jackpot. He’ll score some information that changes everything, so it’ll be interesting to see what happens next! We’ll give you updates as other Y&R news comes in. Stay tuned to the CBS soap and don’t forget to check CDL often for the latest Young and the Restless spoilers, updates and news.