The Young and the Restless Spoilers: Week of October 28 Halloween Preview – Nightmares Bring Horror – Adam Lying in a Casket 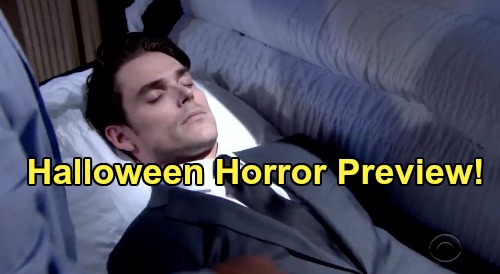 The Young and the Restless (Y&R) spoilers Halloween preview promo for the week of October 28-November 1 teases that we’ll see plenty of tricks and treats. Some exciting episodes are coming up – including a Halloween special with some bizarre nightmares. Y&R will show us the dreams of five characters, but many other characters will tie in with all the spooky drama.

First, let’s talk about Nick Newman (Joshua Morrow). He’ll kick things off since he’ll be switching through channels on Halloween night. When Nick stumbles across a horror flick, he’ll doze off and set the stage for the rest of the episode. Y&R spoilers say Nick will imagine an alternate reality where Adam Newman (Mark Grossman) is dead in a casket.

However, everyone will have high praise for Adam in this nightmare. Nick will be taken aback when so many people gush about Adam and how much he’ll be missed. It sounds like Adam will be treated like the beloved Newman son whose life was cut tragically short. Perhaps that means Nick will get a taste of being the black sheep! Since Nick appears to have a knife in the preview clip, he might even be the one to do Adam in.

Meanwhile, Phyllis Summers (Michelle Stafford) will rise to the top in her dream. She’ll be on a power trip after gaining control of Newman Enterprises. In Y&R’s weekly promo, Phyllis’ picture has replaced Victor Newman’s (Eric Braeden) portrait on the wall. She snaps her fingers to make Kyle Abbott (Michael Mealor) disappear along with Jack Abbott (Peter Bergman) and declares their services are no longer needed.

Unfortunately, Phyllis’ dream will turn into a disaster – and we’re not just talking about the awful wig she’ll be wearing. The Young and the Restless spoilers say Phyllis will learn a valuable lesson by the end of the night. Power isn’t everything. In fact, sometimes it can be dangerous!

Over with Abby Newman (Melissa Ordway), she’ll have a dream that’s a bit like a ‘70s-sitcom. In the latest issue of Soap Opera Digest, Josh Griffith suggests it’s Mary Tyler Moore-ish and allows Abby to explore a question that’s plaguing her: “Do I deserve this?” Abby’s achieved a lot of success in her young life, but she’ll wonder how much of it she’s really earned.

The Young and the Restless spoilers say Abby will be the center of attention in her nightmare and definitely not in a good way. It’s a dream she’ll be desperate to wake up from! Elsewhere, Rey Rosales’ (Jordi Vilasuso) alternate reality will have a ‘40s film noir backdrop. He’ll be more of a bad boy in his black-and-white dream, but he’ll need Sharon Newman’s (Sharon Case) help to pull it off.