BY Heather Hughes on August 30, 2019 | Comments: one comment
Related : Soap Opera, Spoiler, Television, The Young and the Restless 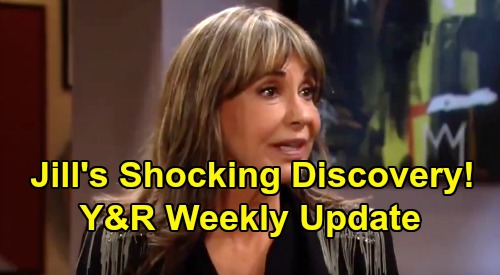 The Young and the Restless (Y&R) spoilers update for the week of September 2-6 tease that we’ll see some scheming and some celebrating. First, let’s talk about the Grand Phoenix opening that’s rapidly approaching. Abby Newman (Melissa Ordway) is particularly excited about the posh lounge she’s worked so hard on. She’s partnered up with Chelsea and they plan to make this hotel a real success.

In anticipation of the big opening, a different bash will kick off. It’ll be a smaller pre-party to celebrate Abby and Chelsea’s accomplishment. There’ll be plenty of speeches, drinking and mingling at this little gathering. It looks like it’ll be a fairly quiet shindig at Society, but that’ll serve as the perfect calm before the storm.

Chelsea will tell Nick Newman (Joshua Morrow) she can’t remember the last time she had that much fun. They’ll share a kiss and enjoy some flirty moments, but Chelsea had better enjoy herself while she still can. Hurricane Phyllis Summers (Michelle Stafford) will make it her mission to rain on their parade soon enough. Abby and Chelsea have no idea what’s in store for them at the actual opening.

However, Y&R spoilers point to a truce down the road. That’s about the only way to ensure Phyllis won’t blow up your world on a daily basis! Phyllis can be awfully stubborn, so Chelsea and Abby may have to surrender eventually. Whatever the case, the Grand Phoenix opening will indeed come with a scandal and the result will be a total disaster.

Meanwhile, The Young and the Restless spoilers say Devon Hamilton (Bryton James) will deliver bad news. He’ll tell Jill Abbott (Jess Walton) that someone’s challenging Katherine Chancellor’s (Jeanne Cooper) will, but he’ll be determined to fight it. Jill will support Devon as he worries about what the future holds. He won’t want to take a financial hit, but he’ll know that’s a very real possibility.

Over with Victor Newman (Eric Braeden), he’ll get lovey-dovey with Nikki Newman (Melody Thomas Scott) and insist he’s a lucky man. Unfortunately, Victor may not feel so lucky once Adam makes his next move. He’ll hope to hack into Nate Hastings’ (Sean Dominic) tablet with Phyllis’ help and access Victor’s medical records.

That obviously points to a nefarious plot, but Victor’s smarter than the average bear. He’ll be onto Adam after a bogus attempt at peace, so he’ll at least know to be careful. Nikki Newman (Melody Thomas Scott) will also corner Adam as he’s committing a terrible act. It’s clear that everyone will be on guard as this Newman war heats up.