The Young and the Restless Spoilers: What’s Amanda Hiding – Is She Running From An Abusive Ex? 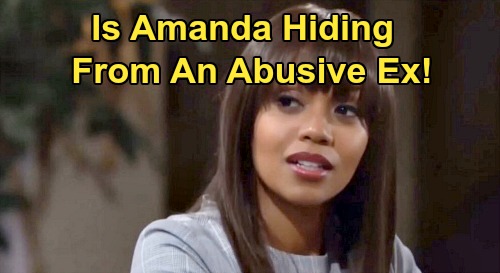 The Young and the Restless spoilers tease that Amanda Sinclair (Mishael Morgan) has a big secret. She’s acted skittish since she first came to Genoa City. And at first, it seemed to be related to her involvement in the challenge to Katherine Chancellor’s (Jeanne Cooper) will. Amanda showed up on Devon Hamilton’s (Bryton James) doorstep, supposedly unaware that she looked just like Hilary Hamilton (Mishael Morgan). It just seemed a bit suspect, and Devon still doesn’t trust Amanda.

The Young and the Restless spoilers tell us it’s looking more and more like Amanda wasn’t involved in the will scam, and that she was hired under false pretenses by either Colin Atkinson (Tristan Rogers), Cane Ashby (Daniel Goddard), or both of them. And throughout Amanda’s time in Genoa City, she has engaged in some behaviors that suggest that she might be running from someone.

First off, as Y&R viewers know, Amanda has been tracking someone’s whereabouts. She’s been shown looking at a tracking device on her phone several times, and on one occasion she spoke with someone via phone and said that he was glad to know where “he” was at all times. That certainly sounds like she wants to keep her distance from someone.

And then, during the hostage standoff at The Grand Phoenix, Amanda got extremely agitated when she learned from Cane that the hotel was locked down and the two of them were trapped in her hotel suite. She got quite nervous and lamented about how she was unable to “escape,” causing Cane to question who had held her against her will in the past. He later dropped the issue, leaving things unresolved for viewers.

Around this same time, Amanda saw a man in the lobby of The Grand Phoenix and nearly panicked. But when the man turned around, she apparently saw that he wasn’t who she feared he was. And now it seems that Amanda will be staying in Genoa City permanently. She remarked recently to Nate Hastings (Sean Dominic) that she desired a fresh start and that there was really nothing left for her in Madison.

So, all of this seems to point to Amanda wanting to flee from a very bad situation. Could she possibly have an abusive or controlling ex-boyfriend out there who would like to track her down? Or perhaps it’s not an ex but a stalker who wants to do her harm. That could explain why she’d have a tracker on the person’s car, so she’d know if he were in close proximity.

Of course, if Amanda does have an ex or a stalker who is after her, then it will probably only be a matter of time before he shows up in Genoa City. We can’t forget that Victor Newman (Eric Braeden) decided to have someone investigate Amanda after he met her a few weeks ago. If his people go snooping around in her past, then they could inadvertently tip off the ex/stalker as to Amanda’s current whereabouts.

At any rate, it will be interesting to see what Amanda’s story is. Do you think she’s running from someone dangerous? Stay tuned to the CBS soap and don’t forget to check CDL often for the latest Young and the Restless spoilers, updates, and news.