The Young and the Restless Spoilers: Who Shot Adam Newman – Suspect List Revealed

BY Sean O'Brien on May 17, 2019 | Comments: Leave Comments
Related : Soap Opera, Spoiler, Television, The Young and the Restless 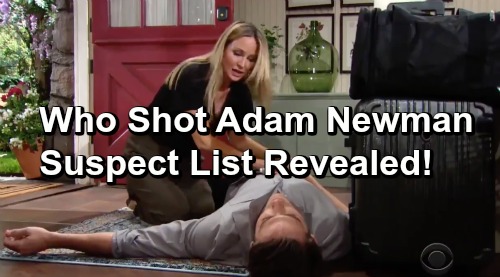 The Young and the Restless spoilers tease that many people have wanted Adam Newman (as now played by Mark Grossman) dead. In the past, it was Billy Abbott (as then played by Billy Miller) and then, Chloe Mitchell (Elizabeth Hendrickson) who tried to take his life. But who wants him dead this time?

Bang, your dead, Adam! Well, not exactly, after the entire recast process Grossman isn’t exiting the cast after just debuting. Instead, the shot Adam takes sends him to the hospital. This drama results in his memory coming back, which is similar to a lighting strike, right?

The perp who pulled the trigger could be an underworld figure, possible based in Las Vegas, Nevada. Adam had that duffel bag full of cash at the tack house, which he surprisingly allowed Sharon Newman (Sharon Case) to see. That green pile could have provided plenty of incentive to fill Adam full of lead, with some paid muscle performing the job.

Victor Newman (Eric Braeden) was having his undead son monitored, as viewers learned a day before the shot rang out. An overzealous member of the Moustache’s private security force could have reacted badly, shooting Adam by accident. It seems as though one of Victor’s people dropped the Delia Abbott (Sophie Pollono) photo for Adam to see.

Today’s Billy (as now played by Jason Thompson) seemed to believe Adam’s memory loss story, meaning that tale is believed to be real. But he also told his revived love, Vickie Newman (Amelia Heinle), that a flood of emotions came back when he looked into the eyes of his deceased girl’s eyes.

Might that emotional rush have caused Billy to go berserk? Although, Delia’s mother would seem like the better and possibly, far more obvious choice.

Chloe faked her own death, along with Kevin Fisher (Greg Rikaart) and Victor’s help. That alone would make her return to Genoa City, Wisconsin, possible, as she would expect to remain uncover.

But, how would Chloe have learned Adam was alive? Even though Esther Valentine (Kate Linder) doesn’t know Chloe is alive, she may have called Kevin after seeing him in town.

One unexpected option could be Chelsea Newman (Melissa Claire Egan). Although Y&R would have to write her as being deranged, because Chadam is still married, technically, and Chelsea would be thrilled to know her husband and Connor Newman’s (Gunner and Ryder Gadbois) father is alive.

Nick Newman (Joshua Morrow) probably can be ruled out. He just said that he’s willing to give Adam a chance. But what about a side character like Ian Ward (Ray Wise), who’s often on every suspect list?