BY Sean O'Brien on January 9, 2019 | Comments: one comment
Related : Soap Opera, Spoiler, Television, The Young and the Restless 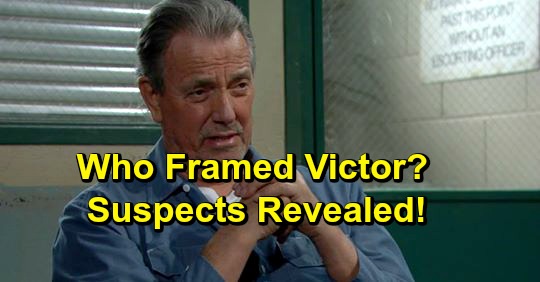 The Young and the Restless spoilers tease that Victor Newman (Eric Braeden) is being framed for the murder of J.T. Hellstrom (Thad Luckinbill). So, which Genoa City characters are reasonable suspects since the identity of this person isn’t known?

Viewers, along with Nikki (Melody Thomas Scott) and her coverup crew, know, for a certain fact, that Victor did not kill Luckinbill’s often-referenced alter ego. Christine (Lauralee Bell) doesn’t feel good about the case Rey (Jordi Vilasuso) thinks he built. There’s no body, so a place and time of death can’t be established.

Meanwhile, a secondary crime has been committed. Someone who has a sharp axe to grind against the Moustache planted Victor’s gun and a shirt of J.T.’s that was either bloodied on the night he died, or somehow thereafter.

But who would want the Black Knight behind bars for the rest of his life? This digital column isn’t a series, so let’s focus on some of the Great Man’s prime enemies, or other connected dark personalities.

Jack (Peter Bergman) visited his nemesis at the prison. Mr. Abbott felt certain that Victor was guilty of the crime, so much so that he’s emerged as a lead suspect in this frame. Jack seemed genuinely surprised that the evidence the GC Police Department has is so thin. This doesn’t mean he’s innocent, but Victor’s main foe probably hasn’t been orchestrating this particular scenario, even considering the Marco (also played by Bergman) incident.

It would make sense to believe that Phyllis would have framed Victor. She instantly proclaimed herself as the coverup crew’s fixer, believing that Christine and Paul (Doug Davidson), Chief of Police in GC at the time, would act on revenge and send her up the river simply because she was linked to Nikki’s actions.

But what about Tessa (Cait Fairbanks)? Y&R has surely made her look very, very shady since the summer. The entire Crystal (Morgan Obenreder) arc seemed concocted, as does the claimed coyote enforcers that Tessa says have been after her.

While the Tessa tag seems easy, maybe that’s the rub. She’s the red herring in this part of the elongated storyline?

And then there’s the returning Mackenzie (Kelly Kruger). If she learned what happened and came to believe Victor was at fault, then she could be the framer as well.

Victor has plenty of enemies across the globe, as he told Jack. Maybe one of them did it? Soon Y&R fans will know. CDL is a leading source for everything linked to The Young and the Restless. Check back regularly for Y&R spoilers and news!