The Young and the Restless Spoilers: Thursday, January 10 Recap – Outburst At J.T. Memorial – Mia and Arturo Get Too Close

BY Heather Hughes on January 9, 2019 | Comments: one comment
Related : Soap Opera, Spoiler, Television, The Young and the Restless 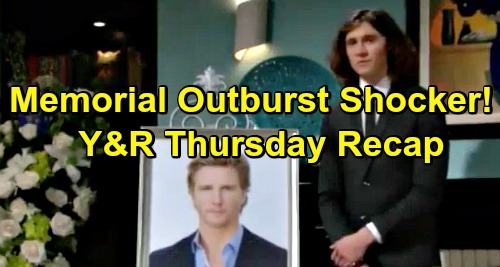 The Young and the Restless (Y&R) spoilers update and recap for Thursday, January 10, tease that the guests will gather for J.T. Hellstrom’s (Thad Luckinbill) memorial service. Victoria Newman (Amelia Heinle) will be particularly concerned about two of them. For starters, Victoria won’t think Nikki Newman (Melody Thomas Scott) should be there. She’ll worry that Nikki’s already had too much to deal with.

Nikki will refuse to abandon Reed Hellstrom (Tristan Lake Leabu), especially since she’s responsible for his father’s death. Next, Victoria will question Cane Ashby’s (Daniel Goddard) decision to show up. She’ll feel like Cane took a tough situation and made it even tougher. They’ll be interrupted, so Victoria will just let it go and hope Cane doesn’t cause trouble.

Meanwhile, Nick Newman (Joshua Morrow) will try to talk Phyllis Summers (Gina Tognoni) into attending J.T.’s service. Phyllis won’t see the point since J.T. was an awful human and Reed won’t care if she’s there or not.

Nick will mention that Nikki’s going, which will leave Phyllis nervous. She’ll decide maybe she should attend after all – undoubtedly to keep an eye on the fragile cover-up crew member.

Over with Abby Newman (Melissa Ordway), she’ll fill Arturo Rosales (Jason Canela) on her plans. He’ll be taken aback to learn Abby’s attending J.T.’s memorial gathering. Abby will acknowledge that it’ll be weird since Victor’s been charged with J.T.’s murder, but she’ll intend to suffer through it.

Back at Victoria’s house, Reed will share a sweet moment with Traci Abbott (Beth Maitland). She’ll suggest that she sees the good parts of Reed’s dad when she looks at him. Reed will be grateful that someone still sees the good in J.T.

He’ll greet Mackenzie “Mac” Browning (Kelly Kruger) next. Mac will get that all this has to be rough on Reed. It’s hard to let go when there are so many lingering questions.

Nearby, the girls’ night gang will bicker. The Young and the Restless spoilers say Phyllis will think it’s too risky to let Nikki stay, but Victoria will threaten to throw Phyllis out instead. Sharon Newman (Sharon Case) will also be on hand to hear Nikki’s ominous statement. She’ll admit she can’t promise that the truth won’t come out.

Y&R fans will hear several speeches, including one from Traci along with one from Reed. After Reed breaks down in tears, an emotional Nikki will blurt out that she’s so sorry. That’ll convince Phyllis to rise to her feet and declare that there’s something she wants to share about J.T. She’ll think her news needs to be heard, so expect the abuse bomb to drop by the end of the week.

At Rey Rosales’ (Jordi Vilasuso) place, he’ll get a call from the station. Rey will inform Mia Rosales (Noemi Gonzalez) that there’s been a drug bust and he needs to go handle it. Since the furnace is still acting up, Mia will push Rey to go do his job and let her deal with the heat. She’ll call Arturo for help, but he’ll take another look and confess that the unit will have to be replaced.

Since Arturo’s pal can bring another by soon, he’ll opt to wait there with Mia. They’ll get under a comforter together for warmth and bond over some photos. Mia will suggest that she’s having trouble with Rey’s absence this evening. Arturo and Mia could be headed into dangerous territory…

At the athletic club, Lola Rosales (Sasha Calle) will appear all dolled up for her date night with Kyle Abbott (Michael Mealor). They’ll share a dance and laugh over their first impressions of each other.

Kyle will feel like they avoided all the usual drama of a relationship, so he’s apparently got some memory problems. Lola the frugal drama queen broke up with him over a handbag not too long ago!

The Young and the Restless spoilers say Lola will be grateful to Kyle. She’ll appreciate how understanding he’s been about waiting to have sex. Kyle will assure her that it’s fine, but his face will tell a different story.

It sounds like more issues are ahead for Lola and Kyle. We’ll give you updates as other Y&R details emerge. Stay tuned to the CBS soap and don’t forget to check CDL often for the latest Young and the Restless spoilers, updates, and news.